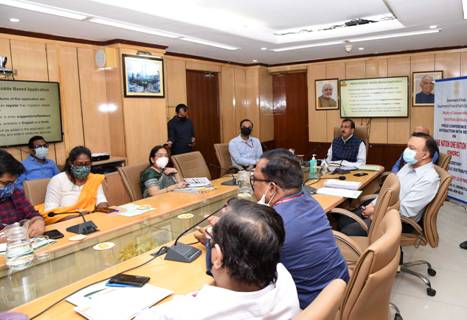 New Delhi: The Union government on Friday launched the Mera Ration mobile app, which will be especially beneficial for those ration card holders who relocate from one state to another.

Addressing a press conference on ‘One Nation One Ration Card’ (ONORC) plan, Sudhanshu Pandey, Secretary, Department of Food & Public Distribution, said that the system has been rolled out in 32 States/UTs by December 2020. It currently covers 69 crore National Food Security Act (NFSA) beneficiaries, which represents 86% of NFSA population in the country.

The integration of the remaining 4 states/UT (Assam, Chhattisgarh, Delhi and West Bengal) is expected to be completed within next few months, Pandey informed.

About 1.5-1.6 crore portability transactions are currently being done in a month under ONORC.

The option of choosing any ration shop was not available earlier.

Rain Brings Down Daily Forest Fire Alerts To 700 In Odisha

Odisha To Implement ‘One Nation One Ration Card’ Policy from…