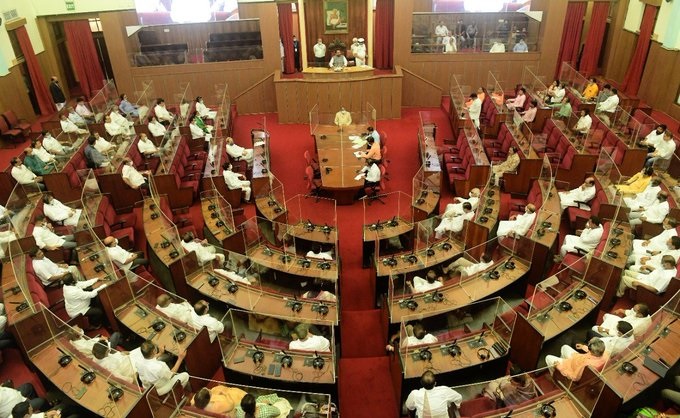 Bhubaneswar: The Odisha Assembly witnessed uproarious scenes on Monday after ruling BJD and Opposition BJP and Congress MLAs locked horns over government property seized by L&T for non-payment of dues.

The issue was raised by Opposition MLAs during Zero Hour of the Monsoon Session.

A report in Sambad quoting sources said that the state government was yet to pay Rs 20 crore due to L&T, which has now gone up to Rs 120 crore after including interest.

State government property worth lakhs of rupees was recently seized by L&T on court orders, the report said.

Raising the issue, Opposition MLAs sought a clarification from the Works Minister on the issue.

“A review petition was earlier filed with the Supreme Court in connection with the issue. Hence, as per Rule 60 (VII), a matter which is already sub-judice cannot be debated on the floor of the House,” Speaker Bikram Keshari Arukh said.

BJP chief whip Mohan Majhi opposed the ruling pointing out that the case was not accepted for hearing in the Orissa High Court. He demanded a debate calling it a delicate issue.

Congress MLA Tara Prasad Bahinipati said the state government did not give importance to the issue from 2004 to 2022. According to him, the private company has access to confidential information of the government stored in a number of computers it has seized.

He demanded that the company be black-listed immediately and properties of government officials responsible for the wrongdoing be seized.

BJD MLAs, however, said that the Speaker’s ruling must be treated as supreme in the House.