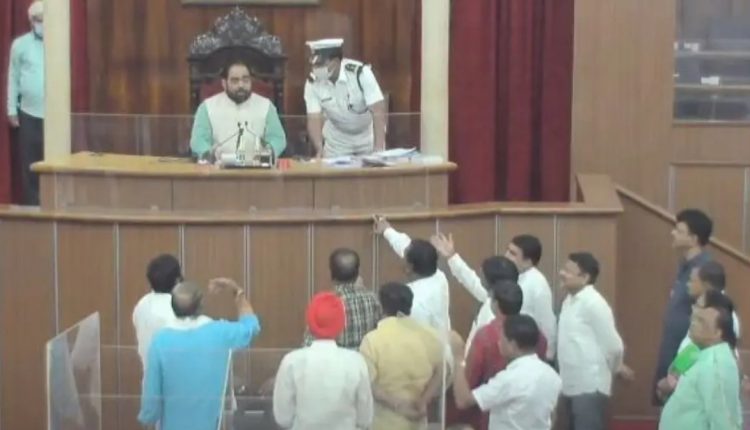 Bhubaneswar: Opposition parties created an uproar in the Odisha Assembly on Friday in protest against the restrictions on entry of journalists to the press gallery in the House.

The MLAs of both BJP and Congress raised the issue during Question Hour and disrupted the proceedings. They rushed to the well of the House and demanded the restrictions to be withdrawn.

Congress Chief Whip Tara Prasad Bahinipati demanded the Speaker to allow media persons to enter the press gallery to cover the proceedings. They should sit in the press gallery, not the visitors’ gallery, he said. Soon, other Congress members raised slogans in favour of the demand.

The BJP members also supported the demand and pandemonium prevailed in the House. BJP Chief Whip Mohan Majhi said the journalists could not report the proceedings of the Assembly correctly as they were asked to sit in a different room.

If lakhs of people could participate in the Rath Yatra at Puri and Parliament function normally, why the journalists could not be allowed into the press gallery, he asked. Jayanarayan Mishra of BJP, Santosh Singh Saluja of Congress and Laxman Munda of CPI (M) also made the same demand.

Speaker BK Arukha said the new seating arrangements for MLAs and journalists were finalised at an all-party meeting in view of the COVID, said the Speaker. Since a few days are left for the current session of the Assembly, a decision on lifting the restrictions on the media would be taken in the next session considering the situation at the time, he added.

However, the opposition members were not satisfied with the Speaker’s statement and continued to raise the demand. Unable to conduct the House business, the speaker adjourned the House and convened an all-party meeting.