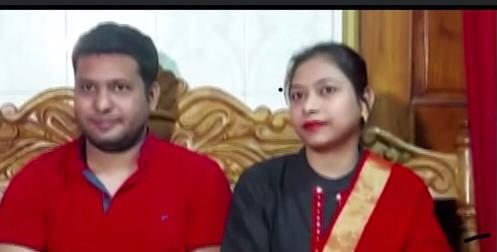 Dhenkanal: Lovers often promise to gift the moon to their beloveds. But this Odisha man has also “kept the promise” to his wife.

Meet Mohammad Sajan, a resident of Dhenkanal district. In an ‘out of this world’ idea literally, Sajan bought five acres of land on moon and presented it to his wife Nazia on her birthday.

Sajan is working as a software engineer in Kuwait. He hails from Karagara Sahi near Chandan Bazar.

He got married to Nazia a year ago. After reading a news that late actor Sushant Singh Rajput has bought land on the moon, Sajan also planned to do likewise.

First he applied to the Lunar Society International website by giving his wife’s name and address on October 29, 2020. Then he paid $519 (nearly Rs 37,000) to buy the lunar plot.

However, due to COVID restrictions, he could not complete the land registration in time. He received the papers some days ago and gave them to his wife.

“I returned home from Kuwait during the lockdown. I learned that Sushant Singh Rajput has bought a piece of land on moon. Inspired by him, I also planned to buy a plot on moon. It is not difficult now to buy a land on moon. We have to renew it in every five year,” Sajan told a vernacular daily.

In a similar incident in Odisha lat month, a man from Kendrapada district had bought a plot of land on moon for his daughter.