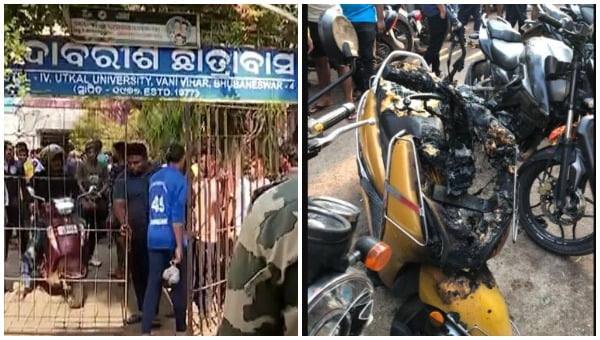 Bhubaneswar: Tension prevailed on Utkal University campus in Odisha capital after multiple vehicles were set on fire at boys hostel, late on Saturday, following a clash between two students’ groups after Holi celebrations.

According to sources, some miscreants barged into Godabarisha Boys Hostel, vandalised several vehicles and torched a few two-wheelers.

Following the incident, the inmates of the hostel staged a protest by locking the gate of the hostel. The PG Council Chairperson and other officials of the university later held discussions with the students.

Though the exact reason behind the group clash is yet to be ascertained, both groups have filed complaints at Saheed Nagar police station, the sources added.

It is pertinent to mention here that Utkal University had recently carried out a drive to keep a check on the entry of outsiders inside the campus.

Daily COVID Count In Odisha Falls Below 50, Single Case In 9 Districts, Including Khurda