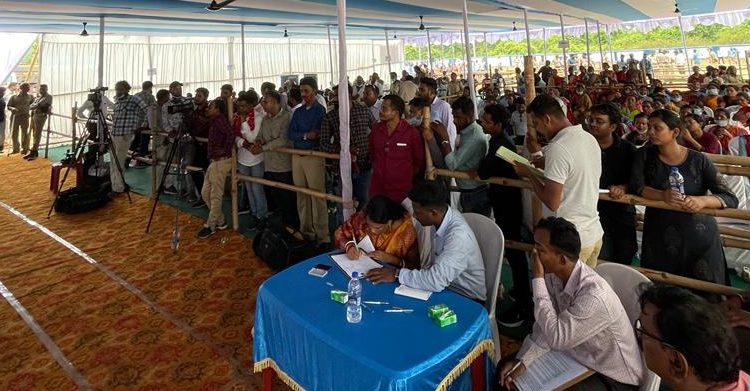 Koira: The State Pollution Control Board (SPCB) and Sundargarh district
administration organised a public hearing on Wednesday to further
environment clearance for capacity expansion of JSW Ganua iron ore
mines.
More than 2,000 people from 10 villages including Patbeda, Koida, Malda and Ganua attended the public hearing in which nearly 60 speakers presented their views before government officials. The hearing concluded successfully in a peaceful manner, stated the government and company officials.

The public hearing was conducted for Ganua Iron Ore Mines of JSW Steel
for expansion of the project by enhancement of 3.4086 million TPA
along with screening and crushing 1000 TPH central processing unit over
an area of 88.516 hectares as per DGPS.

“The company is also actively engaged in periphery development in and
around the mines area. Solar street lights have been installed and public
health issues are being addressed through health camps,” Padhi added.

Addressing the local concerns, he said, “We have noted all the demands
and efforts will be made to resolve them in a phased manner.”

Reports suggest that current annual steel production capacity in India is 12 MT, and according to the National Steel Policy, India is expected to produce 300 MT of steel annually by 2030.  Of this, Odisha has the capacity to produce 125 MT of steel annually and JSW Steel aspires to play an important role in attaining this goal. The company aims to produce 40 MTPA steel in India by 2030, and Odisha would be central to this objective, the company stated in a release.

Cult Movie Anand To Be Remade After 51 Years; Netizens Revolt, Say ‘Please Don’t Do It’

5 Controversies Of Nawazuddin Siddiqui: From Spat With Rishi Kapoor To One-Night Stand With Waitress In NY