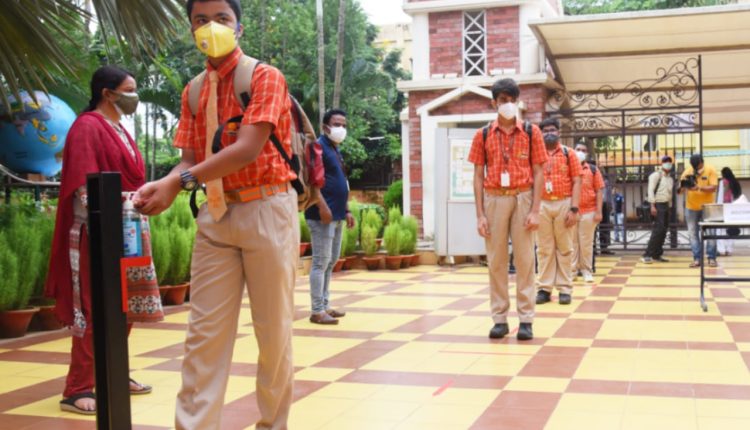 Bhubaneswar: After over 70 students in Odisha’s Sundargarh and Sambalpur districts were found infected in the past three days, parents in the state have demanded stricter implementation of COVID protocols in various schools and thorough inspection by the authorities concerned to ensure that the guidelines are adhered to.

While the daily COVID caseload in Odisha crossed 200 on Tuesday, 33 per cent of the infectees were below the age of 18. The state saw a marginal rise in new infections on Wednesday as 288 people tested positive for the virus and 18 per cent of them were children and adolescents

Meanwhile, the state government and private schools in the state have urged and advised parents not to send children suffering even with mild symptoms of fever, cough and cold to the schools.

Some parents, however, alleged laxity and negligence on the part of some private schools towards the implementation of the COVID safety protocols. “Some schools don’t have the proper infrastructure to maintain physical distance among students or carry out thorough sanitization of the campuses. In such cases, the state government should take steps to review the arrangements in various schools and take strict action against any violation,” said Mita Rani Sahoo of Sailashree Vihar, who is also a member of the Organisation of Parent Associations’ Forum (OPAF).

Meanwhile, a few parents expressed concern over annual events being conducted on school campuses, which might lead to a spike in COVID cases.

In such a scenario, parents have also urged the authorities of various schools to conduct classes in smaller batches of 10 to 15 students in different shifts. They also suggested that classes could be held on alternate days. But, in no way do they want the schools to shut down again.

“There is panic among parents. But, they also want to send students to school as most of them have undergone behavioural changes. It should be ensured that all protocols are followed properly,” said Gagan Rout, another member of OPAF.

Meanwhile, various private schools in the city claimed that they had been following the protocols strictly. “Teachers are on the rounds to check whether students are wearing masks properly or not. We are conducting thermal screening of the students and ensuring they maintain physical distancing norms even during games or activities periods,” said Ishita Das, principal of DAV Unit 8 School.

“We are conducting thermal checks of students even when they are boarding the bus. They are not allowed to board if found with symptoms. Besides, all other safety protocols are being followed,” said Sanjay Suar, principal of KIIT International School.