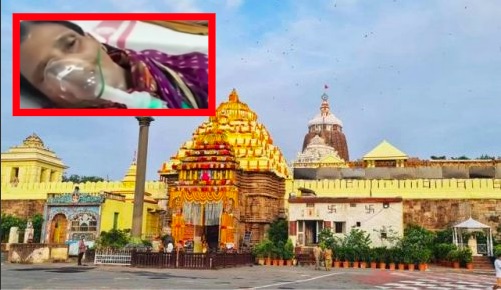 Puri: Two devotees fell ill following a stampede-like situation due to a heavy rush at Jagannath Temple in Odisha’s Puri town on Sunday.

The two devotees were identified as Sulochana Sahoo of Hatagadia Sahi in Puri district and Dibya Sahoo, a minor girl, from Pithapur area in Cuttack district.

According to sources, there was a rush at the temple early this morning and people queued up at Singhadwara, waiting for the door to open, which was delayed owing to the previous day’s Makar Sankranti rituals. The devotees dashed in as soon as the door opened.

While one was injured in the melee, Sulochana Sahu, fell down and became unconscious while preparation was on for Mangala Alati near Bhitar Katha of the temple.

This came a day after a woman was killed and eight others injured, including several children, in a stampede on T-Setu bridge, connecting with Singhnath Pitha, a Shiva shrine at Gopinathpur in Badamba block, on the Mahanadi in Odisha’s Cuttack district.