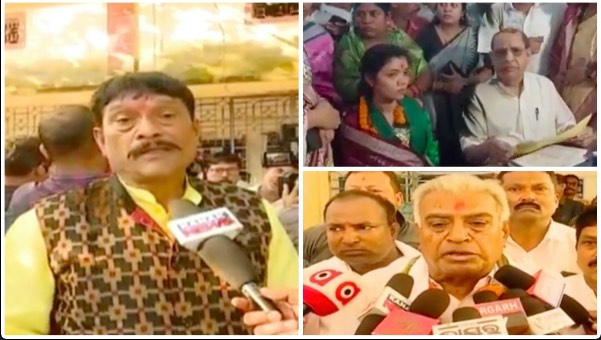 Bargarh: The nominees of BJD, BJP and Congress for the Padampur bypoll in Odisha’s Bargarh district, scheduled on December 5,  filed their nomination papers at the sub-collector office on Thursday.

Pradip Purohit, the BJP nominee, who took out a huge rally on November 14, had returned without filing nominations to express solidarity with farmers, protesting over non-payment of crop insurance claims. The BJD nominee, Barsha Singh Bariha, also deferred filing her papers on November 16 as the farmers’ issue spiralled, leading to a war of words between the ruling party and the saffron party with each blaming the other for their predicament.

With an independent nominee filing nomination for the bypoll, the parties, which had adopted a wait-and-watch approach waiting to see who would blink first, got into action mode. Thursday was also the last date for nomination filing.

Accompanied by supporters and party leaders, including Prasanna Acharya and Reeta Sahu, BJD nominee Barsha filed her nomination papers this afternoon. She is the elder daughter of late MLA Bijay Ranjan Singh Bariha, whose death necessitated the bypoll, and daughter-in-law of senior BJP leader Rama Ranjan Baliarsingh, who was elected from the Satyabadi constituency in Puri district as an independent in 2004.

According to the official notification, the scrutiny of the papers will be held on November 18. The last date for withdrawing candidature is November 21.

Undeterred by the Dhamnagar debacle, the BJD has again played the woman card and hopes to retain the seat by cashing in on the sympathy wave with Barsha in the fray. Purohit, who lost the 2019 election by a margin of over 5000 votes, is looking to give a tough fight to the ruling party.

Sahu is also a popular face in Padampur having represented the Assembly constituency in 1980, 1985 and 2004.