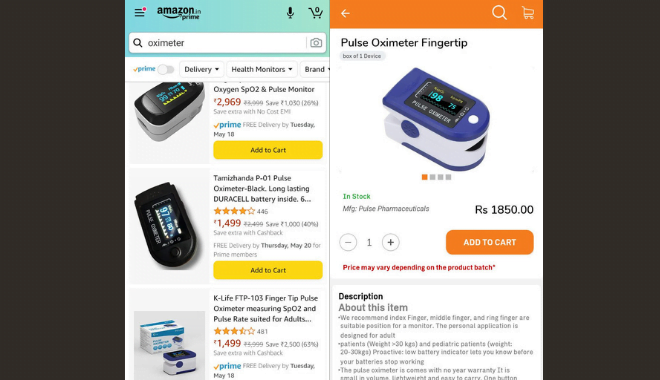 Bhubaneswar: Similar to black marketing of crucial drugs and ventilators during the pandemic in some Indian cities, the simple pulse oximeter has seen a steep price hike owing to increased demand in Bhubaneswar and Cuttack.

With oximeters flying off the shelves, there has been a good increase in their prices. Earlier, an oximeter was sold for around ₹800. But now the prices hover around the  ₹2,500-₹4,000 mark at medical stores.

This is adding to the financial stress of people in the twin cities.

“A few months ago, I had purchased an oximeter for ₹900. The same one is selling for ₹2,400 now,” said Prakash Mangaraj, a marketing executive from Cuttack. “The government should do something about it,” he added.

A medical store owner admitted on condition of anonymity that the cost of buying oximeters from distributors has doubled, while sellers are selling at higher prices. The lowest they would go is ₹1,500 for people known to them, he said.

The same trend is seen on online stores. A quick search on most sites revealed that the prices are now hovering around ₹1,500 to ₹4,000.

The situation is not limited to the twin-cities but is happening in most places and states in India where COVID-19 cases have increased.

Doctors and health experts recommend keeping an oximeter at home to monitor oxygen levels of home isolation patients. If the oxygen level falls below 94, they are supposed to contact their doctor or get admitted.

Odisha Bracing Up For Multiple Cyclonic Circulations Over Bay Of Bengal