Berhampur: Panic gripped Surala villagers in Ganjam district after a herd of 12 elephants including a tusker strayed into the village late Monday night.

The pachyderms have damaged prawn gheris, fishing nets and other goods worth around Rs 48 lakh, the fishermen claimed.

DFO Berhampur Amlan Nayak said these elephants had strayed into Ichhapur in Andhra Pradesh on December 25 night from Chikiti and have returned to Odisha.

“The herd entered the brackish water at Surala (locally known as Sana Chilika) from Andhra Pradesh travelling along the river bank of Bahuda. We are trying to disperse them from the locality,” Nayak said.

The DFO, sub-collector of Berhampur and a large number of police force are camping at Surala to monitor the situation.

Now, the herd is stationed at a place full of kewda trees near a temple of the village. 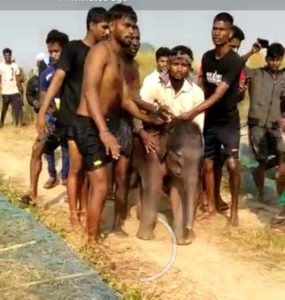 Meanwhile, Nandankanan Zoo officials have taken the elephant calf who was deserted by the herd. The calf was rescued by the locals from Sana Chilika.

Get Express COVID Test Result At This Airport