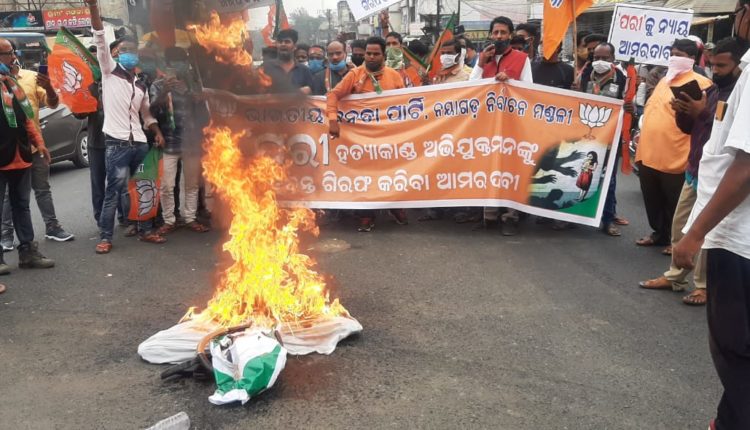 Nayagarh/Bhubaneswar: Even as the state government ordered Crime Branch investigation into the murder of five-year-old girl Pari of Nayagarh, the district unit of the BJP took out a rally and burnt the effigy of minister Arun Kumar Sahoo at Traffic Chhak in the town demanding his resignation.

The local leaders of the party alleged that the prime accused of the case is shielded by the minister who is the Nayagarh MLA. They also submitted a memorandum in this regard to the district collector.

The members of the party’s Mahila Morcha also took out a rally from the BJP’s state headquarters in Bhubaneswar demanding immediate arrest of the accused and resignation of the minister.

On the other hand, Congress MLA of Jatni Suresh Routray has come to the defence of the minister in the case. “Sahoo is a gentleman. He is not involved in any criminal activities,” Routray said.

On self-immolation attempt by Pari’s parents, he said let there be an inquiry into the whole incident. “It is all drama…double drama,” said the MLA.

Meanwhile, an audio clip of conversation between Sahoo and sarpanch of Laxmiprasad panchayat Soumya Ranjan Pradhan has gone viral on social media. Pari’s Jadupur village comes under this panchayat.

Sahoo is heard telling Pradhan that the latter is motivating the parents to say these things. He (Pradhan) must be aware of whatever is happening. They (parents) cannot speak out without consulting the sarpanch.

Saying that Pradhan is going beyond limitation, Sahoo warns him to stop all these things failing which he will not have any sympathy for him.

Earlier, on the direction of Assembly Speaker, Minister of State for Home Dibya Shankar Mishra made a statement in the House stating that the girl was murdered after being kidnapped. He announced the government’s decision to hand over the case to the Crime Branch.

Pari’s father Ashok Sahoo and mother Saudamini had on Tuesday attempted to immolate themselves outside the Odisha Legislative Assembly demanding justice for their daughter. Alleging police inaction in the case, the couple accused minister Sahoo of shielding prime accused and his close aide Babuli Nayak.

Notably, the child had gone missing while playing in front of her house on July 14. A few days later, her skeletal remains were found in a bag behind the house. Her parents alleged that Nayak had kidnapped and murdered their daughter.