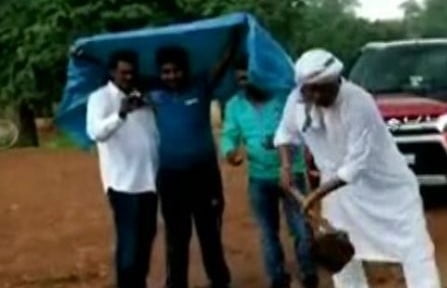 Sporting a white kurta and ‘pagadi’ on his head, the MLA used a spade to put murram on a road to label it on Saturday. Randhari said he tried to make the road motorable for the convenience of villagers.

According to sources, Randhari was travelling from Kantasara to Jabaguda in Papadahandi block to distribute raincoats and food to some women labourers, who were working in the paddy fields in rain.

His vehicle got stuck on the kutcha road on his way. Following this, he got down from his vehicle to make the road motorable. He then proceded to meet the women labourers.

There are no pukka roads at 105 villages in Dabugam Assembly constituency, sources said. Particularly, the condition of roads at 20 villages in Maidalpur panchayat area are very poor.

The MLA instructed the officials concerned to identify such roads and repair them immediately.