Permanent Bench In Western Odisha Demand Back In Focus 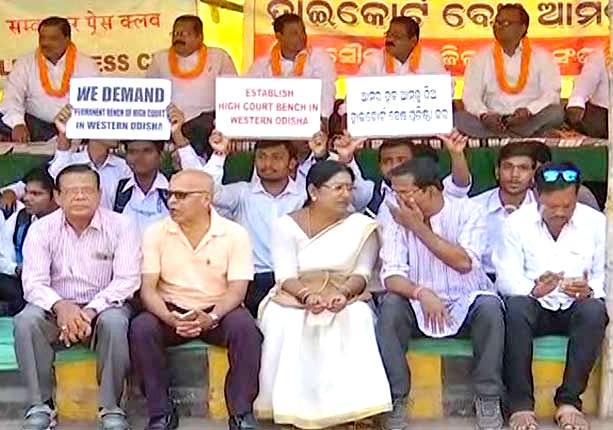 Sambalpur: The Western Odisha Bar Association has decided to intensify the ongoing stir for a permanent High Court bench with a relay hunger strike and two-day ‘Mahabandh’ from November 29.

Since Monday, the agitating lawyers had been picketing at all state and central government offices. Members of several social and cultural organisations have also joined hands, supporting the cause.

All government offices remained closed in Sambalpur, Sundargarh, Sonepur and Deogarh on Tuesday, owing to the strike.

“To put pressure on the central and state governments as well as the Orissa High Court to fulfill our demand, we have launched a relay hunger strike for an indefinite period,” said Sureswar Mishra, a senior lawyer.

Law students also took out a motorcycle rally in protest.

It may be recalled that the Centre, on September 12, had asked the state government to furnish details on the established procedures for the setting up of two permanent benches of the Orissa High Court in southern and western Odisha. In a letter to Chief Minister Naveen Patnaik, Union Law and Justice Minister Rabi Shankar Prasad had asked him to discuss the matter with the Chief Justice of the Orissa High Court.

The Union Minister had also asked the Chief Minister to identify the location and land required for the construction of the building of the two High Court benches and the residential area for judges. He had also requested the Chief Minister to specify the jurisdiction of the two proposed benches and submit a proposal after finalising the details with the consent of the High Court Chief Justice so that the Centre can take the necessary steps.

In Pictures: Chhattisgarh Votes For Final Phase Of Assembly Election