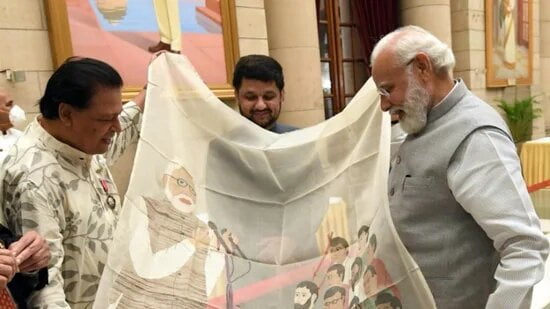 “Shri Biren Kumar Basak belongs to Nadia in West Bengal. He is a reputed weaver, who depicts different aspects of Indian history and culture in his Sarees. During the interaction with the Padma Awardees, he presented to me something which I greatly cherish,” PM Modi tweeted, sharing an image of the said interaction between the two.

The Padma Shri awardee presented to the Prime Minister a sari, with the garment featuring a design of PM Modi addressing a group of people.

Beginning his career in the 1970s with just Re 1, Basak today has an annual turnover of Rs 25 crore. Some of his clients include West Bengal chief minister Mamata Banerjee, cricket legend and BCCI president Saurav Ganguly, and music legends such as Ustad Amjad Ali Khan, Asha Bhosle and Lata Mangeshkar.

Will Return Padma Shri If Proven Wrong: Kangana On ‘Independence Was Bheek’ Remark