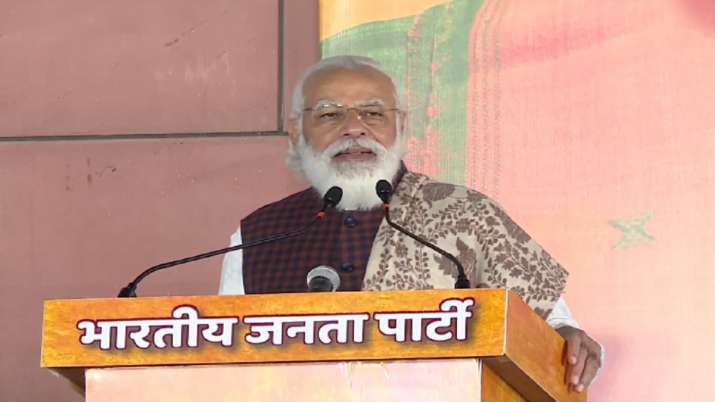 “Who are these silent voters? They are our mothers and sisters for whom the party is working relentlessly. Be it cooking gas or sanitary napkin, BJP has schemes for them and the work went on during the pandemic too.”

Slamming family-run parties from “north to south”, Modi said they are a threat to democracy. “It is unfortunate that a national party has become a family party. In this situation, we have to remain more alert to strengthen the democracy inside the party. Otherwise, how will we trust each other to take the party ahead,” the Prime Minister said during his victory speech at the BJP’s party headquarters.

BJP not only won more seats than its alliance partner JD(U) in Bihar, they tasted success in bypolls held simultaneously in several states.

In the first large gathering since the outbreak of COVID-19 pandemic, thousands of BJP workers assembled at the headquarters to celebrate victory.

The crowd cheered as Modi thanked party workers before making special mention of JP Nadda, who delivered first major win since taking over over reins of the party.

“It wasn’t easy having elections during these times. This expands on the results of the Lok Sabha elections. These elections are significant. We have won in the east in Manipur, in the Kutch desert. If you dedicate yourself to the country, try to do something new, you will get the results too. People see the hard work you put in, your intentions. So during elections, people suffer hardships to vote for you,” the Prime Minister said.

The PM reiterated BJP’s promise that Nitish Kumar will continue as chief minister even though the latter’s party played second fiddle in this election.

Sunny Leone Finds A Way To Stay Safe Without Ruining Her Make-Up!