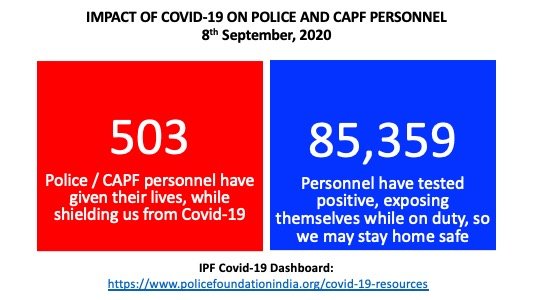 New Delhi: The COVID-19 pandemic has spared no section of society. India’s police force, who have been on the frontline fighting the invisible enemy, have suffered casualties as well.

The Indian Police Foundation released data on Wednesday detailing the number of police personnel affected by the deadly coronavirus.

As per latest figures, a total of 86,483 police personnel have contracted COVID-19 infection across India, of whom 508 have died.

The dashboard informed that 25,013 personnel have been quarantined so far.

Another sad milestone for the Indian Police. As of today, 503 Police / CAPF personnel have laid down their lives, having contracted the virus while on duty, shielding us from the disease. Our heartfelt condolences.
So far, 85,359 personnel have been infected. pic.twitter.com/91c0lKJc7W

The Indian Police Foundation is a multi-disciplinary thinktank that brings together police and citizen stakeholders to collectively work for building professionally efficient and socially sensitive police.

New Rules For Lease & Transfer Of Govt Land In Bhubaneswar