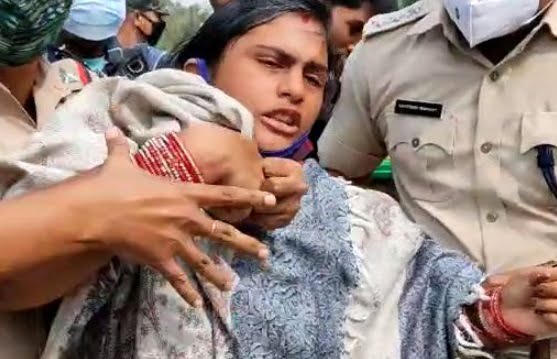 Bhubaneswar: The high-security zone outside the Odisha Assembly premises here witnessed high drama on Tuesday when a couple attempted to immolate self, seeking justice for their daughter.

The couple has been identified as Soudamini Sahu and Ashok Sahu of Jadupur village in Nayagarh district. They are parents of a five-year-old girl, who was allegedly kidnapped in July this year and later her skeletal remains were found in the backyard of their house.

According to Commissionerate Police, security personnel at the spot walked towards the couple when they alighted from an auto-rickshaw before the heavily guarded zone outside the Assembly. On seeing a kerosene bottle in their hand, they caught hold of them. They were later sent to Capital Hospital for a health check-up.

The couple reportedly took the extreme step to draw the attention of the government after their pleas for the arrest of the accused to Nayagarh SP and Collector fell on deaf ears. They had also approached the NHRC and Orissa High Court for justice.

After her attempt was foiled, Soudamini named some influential persons behind the death of her child.

Ashok had earlier alleged, “The culprit kidnapped my little girl and dumped her body and used chemicals to decompose it.”

Bhubaneswar DCP Umasankar Das said that the couple had a grievance over the investigation into a case lodged in Nayagarh Sadar police station. “The couple was made to speak to Nayagarh SP following which they left for their home,” he said.

The suicide bid could be foiled because of the alert personnel and tight security arrangement, he added.

Traffic On Kuakhai Bridge Between Cuttack & Bhubaneswar To Be Diverted From…