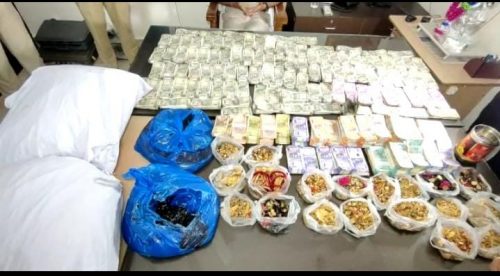 Berhampur: Police have seized a huge amount of narcotic products, cash and gold during a raid on the house of a person in Ganjam district.

According to police sources, acting on information from reliable sources that the person, identified as Rajanikanta Patnaik of Badadanda Sahi under Khallikote police station, was planning to transport the contraband in a two-wheeler, the raid was carried out on his house on Thursday night.

Sub-Inspector MK Pradhan and his staff of Bhejiput outpost conducted the raid in presence of the Executive Magistrate and witness. During the raid, the police team seized 34.94 kg of ganja, 10 kg of opium, Rs 75,09,000 in cash and gold weighing 8.59 kg.

Police have registered a case under Sections 18 (b)/20 (b)(ii)(C)/25/29 of NDPS Act 1985 and the procedure of financial investigation will be undertaken to establish the seizure of huge cash and gold from the possession of the accused.

Rajanikanta was procuring the contraband from Kandhamal and smuggling it to different places, the sources said.