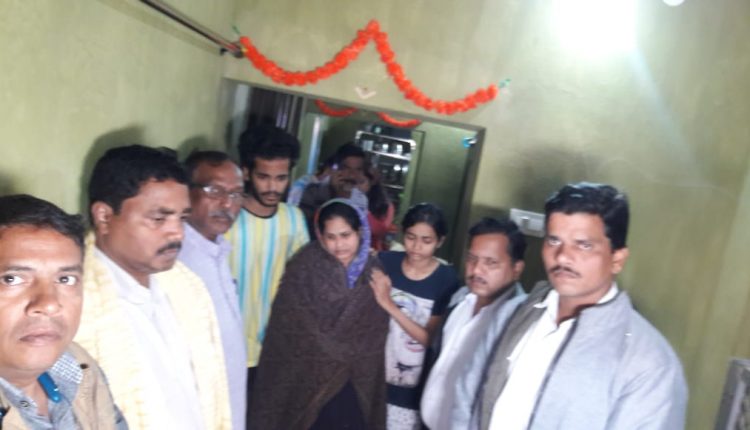 Bhawanipatna: A day after the alleged murder of RTI activist Abhimanyu Panda, 58, in Kandhamal’s Baliguda town, police are clueless about the culprits.

Abhimanyu was shot dead in front of his residence by two unidentified men on Tuesday morning. Baliguda inspector incharge, Sushanta Behera, who is investigating the case, said all efforts are being made to arrest the accused. It may be noted that the RTI activist’s house is situated around 30 metres away from the CRPF camp of Baliguda. According to the FIR lodged with the Baliguda police station two persons, their faces covered with handkerchives came on a bike at 7.30 am and called Abhimanyu from his home and shot him dead.

Abhimanyu’s wife Chhabirani Panda, 53, told mediapersons that both the suspects asked about her husband who was standing in the garden saying they wanted to talk about the Jagannath Temple issue. “I informed my husband and went inside the house. Minutes later, I heard a gunshot and found him bleeding in front of the main gate,” she said. Abhimanyu was rushed to a local hospital on an auto where he was declared brought dead.

A fact finding team of RTI from Bhubaneswar met the family members on Wednesday and demanded a SIT inquiry into the incident. The state convenor of RTI, Pradeep Pradhan held the ruling BJD and local administration responsible saying it was a conspiracy as Abhimanyu had asked detailed information about funds utilised under PDS. He had also asked information from the excise department along with Road and Building division of Kandhamal amounting to more than Rs. 2 crore.

He had also sought information on the construction of a college building along with road work of Baliguda where he was allegedly threatened by the contractors, Pradhan told mediapersons. “Abhimanyu had informed me about the threat calls six months ago. I had told him to inform the police but it is yet to be ascertained whether he did it or not,” said Pradhan. Many cases of Abhimanyu on RTI were pending in High Court and Supreme Court, he added.

“Abhimanyu has left me alone with two children,” said his wife, adding that the culprits should be booked immediately. She alleged that Abhimanyu had sought information from the trust of Jagannath Temple of Balipada. Locals had encroached the temple land but the district administration evicted them.

In the FIR, the family members have mentioned four suspects but police are yet to quiz them. The district convenor of RTI forum Kalahandi, Anjan Rath demanded a judicial inquiry into the murder case saying the government is suppressing the facts, which should be made public.