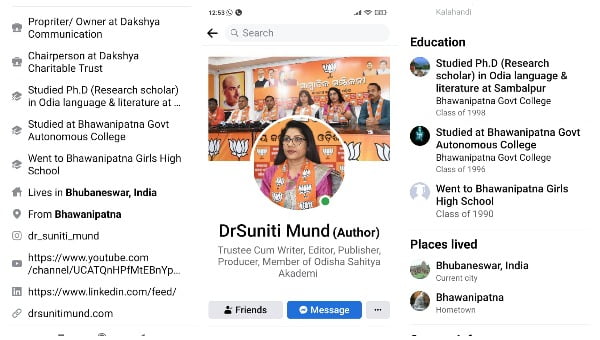 Bhubaneswar: With campaigning for elections to urban local bodies coming to an end on Tuesday, Bharatiya Janata Party’s (BJP) mayor candidate for Bhubaneswar Suniti Mund has come under the microscope for using the ‘Dr’ title.

Normally ‘Dr’ is used as a prefix or title by medical and veterinary practitioners and those with doctoral (PhD) degrees. Those conferred with honoris causa by a university or an institution are also entitled to the respect.

Mund is neither a medical practitioner nor evidently has a doctoral degree. Nevertheless, she brazenly uses Dr before her name. Her party leaders, too, address her in public with ‘Dr’ prefixed to her name. The media as well as some denizens of the capital city have also seemingly fallen into the trap, realising little that the person in question, though in the race for Bhubaneswar’s First Citizen status, could be misleading everyone about her educational qualification.

From introducing herself with a Dr before her name in public to using it as a prefix in her social media accounts, Mund has for reasons best known to her been flaunting the Dr title though she is supposedly not entitled to it. One of her Facebook pages says she was a “PhD scholar from 1996 to 1998 at Bhawanipatna College in Kalahandi district”.

Nothing could be farther from the truth. One, the said educational institution being a degree college did not run PhD programmes; it did not even have Master’s degree courses. Two, Mund’s profile says she was a “PhD Scholar” after completing her graduation in 1996. That a Master’s degree is a prerequisite to enrol for a doctoral programme is something that perhaps didn’t occur to Mund.

Such an academic and intellectual chicanery by Mund, who is a writer with over two dozen books to her credit, has apparently gone unnoticed in the din of electioneering for the March 24 mayoral elections.

Over the past few days, Odisha Bytes tried to contact Mund on several occasions to learn about her educational qualification and “from which university/institution did she complete her doctoral degree and in which year? What was the topic of research? And whether she has been awarded honoris causa by any university/ institution?” However, she did not respond to our telephone calls or messages.

Odisha Bytes also contacted Bhubaneswar MP Aparajita Sarangi, who had while announcing Mund’s candidature here in early March addressed her with the ‘Dr’ prefixed to her name. The MP has been campaigning for Mund. She said she would check with Mund and let us know but the clarification is still awaited. We will add Mund and Sarangi’s versions to this report if and when we receive those.