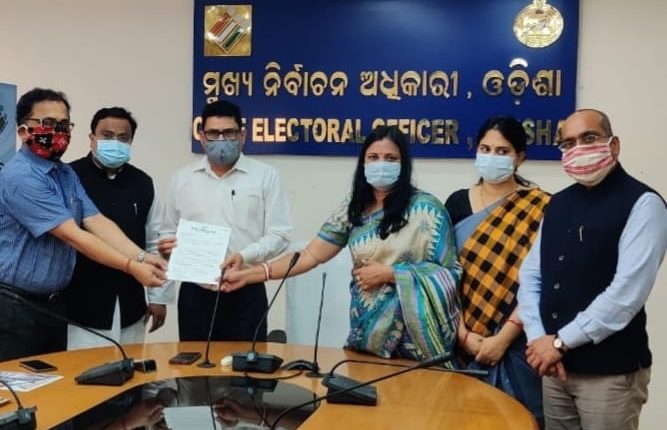 Bhubaneswar: Protesting against the attack on a senior party leader and two workers by BJP activists in Delang block in Pipili constituency, a delegation of BJD leaders met the Chief Electoral Officer (CEO), Sushil Kumar Lohani, on Monday and demanded stern action against those involved in the incident.

The BJD delegation, which was led by Rajya Sabha member Sasmit Patra,also  submitted a memorandum to the CEO.

Later, Patra told mediapersons that BJP workers had launched a violent attack on minister Susanta Singh and smashed the front and rear windshields of his car on Sunday. Later, they attacked two party workers of whom one is undergoing treatment at the CHC in Delang while the condition of the other worker undergoing treatment at Capital Hospital is critical.

He alleged that that the BJP workers also abused the women family members of the two injured workers and pulled their clothes while they had gone to the CHC to meet them.

“Violence in politics and elections is nothing new for BJP. In the Bijepur by-elections in 2018 and the general elections in 2019, the party had launched a series of violent attacks. Recently, Rs 50 lakh was seized from two BJP leaders in Pipili which they wanted to use to influence voters for the bypoll,” Patra added.

Stating that the BJP has been trying to replicate its violence tactics as seen in Uttar Pradesh and Bihar, the BJD MP said the people of Odisha have been defeating the BJP due to the fear that it will try to turn Odisha into another UP or Bihar in terms of political violence. “The people of Pipili will again defeat the BJP in this bypoll and defeat its political and electoral violence agenda,” he pointed out.

Guidelines For COVID Protocol In Healthcare Facilities Issued In Odisha