President Calls For Creation Of Endowment Fund In Utkal University 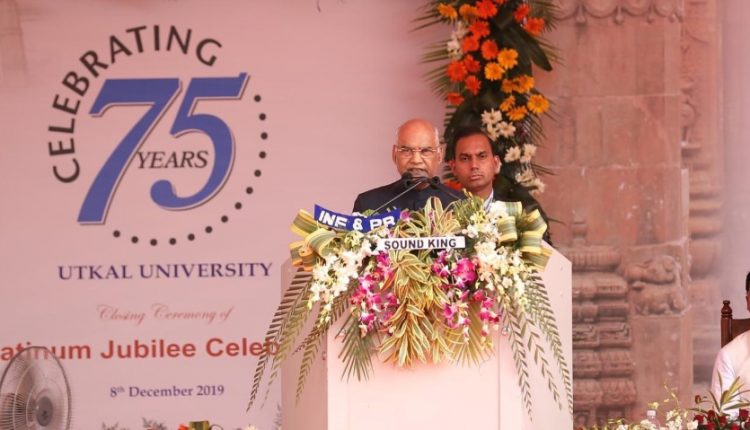 Bhubaneswar: President Ram Nath Kovind on Sunday called upon the Utkal University alumni to consider creating an endowment fund to be utilised for infrastructure creation and setting up of centres of excellence.

Addressing a special function at the university campus to celebrate the conclusion of its platinum jubilee, the President said the fund would send across a message of the pivotal role played by the alumni in shaping the vision and future of the premier university.

Kovind made the suggestion in the presence of Union Minister Dharmendra Pradhan and State Higher Education Minister Arun Sahoo, both of whom are alumni of Utkal University.

The President cited the example of IIT, Delhi endowment fund, which collected Rs 250 crore within one month of its creation. He said while many alumni may not be in a position to contribute, they can contribute to Utkal University through their wisdom and knowledge and through their engagement with students.

“In the next 5 to 7 years I would like to see Utkal University emerge as an Institute of Eminence in our country with a strong international outlook,” Kovind said.

The President’s appeal came even as the university has announced the creation of the alumni fund. Pradhan has pledged to donate one year’s salary to the fund.

He said that while the past students of the university have played a crucial role in the nation-building process, making a mark in their respective fields, future graduates should also act as a catalyst of change. He appealed to the teachers and students to be sensitive to the needs of the marginalised sections of society.

“Universities are great hubs of ideas, but they are not ivory towers. They are part of society and thus remain engaged with social change. The academic community should be engaged in research in areas that create not only a new knowledge base but also a knowledge base that sustains human society,” the President underlined.

“Education is the best tool of social empowerment. I stand before you as a proof of it,” he said.

He said the Platinum Jubilee celebration is also a time to pause and introspect about the achievements of the university, where it stands today and the vision for the future. “For the whole Utkal community, it is time to rededicate themselves to the vision of the founders. I am confident that the University will remain committed to playing a significant role in higher education and research, nationally and globally”.

Pradhan, in his address, appealed in one and all in the state to help the university reach the “heights of glory”. “If the people of Odisha aspire for the growth of Utkal University, no one can stop them from making this happen,” he asserted.