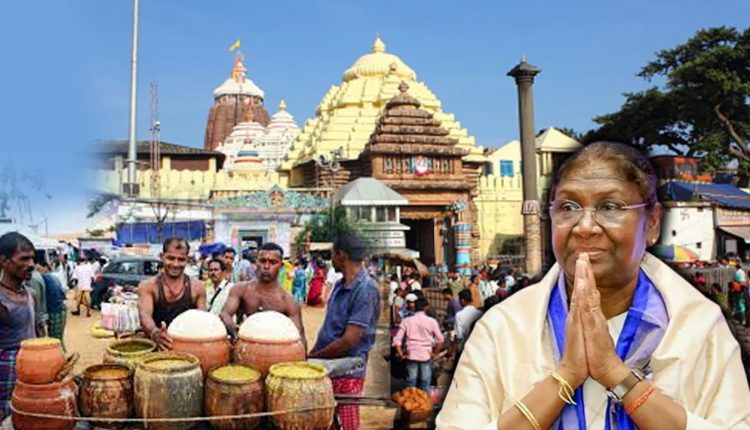 Puri: President Droupadi Murmu will have holy ‘Mahaprasad’ inside Shree Jagannath temple after offering puja to the sibling deities during her visit to the 12th century shrine in Odisha’s Puri on November 10.

Elaborate arrangements have been made for the President to partake the holy Mahaprasad at Ananda Bazar on the temple premises after paying obeisance to the deities inside the sanctum sanctorum of the main shrine.

Murmu is scheduled to undertake her maiden visit to Odisha for two days after assuming the top office in July.

According to a senior servitor, the Suara and Mahasuara Nijog of the temple together with the President’s priest have prepared the menu with a list of dishes to be relished by Murmu. Murmu is an Odia and she might be well aware of the importance of partaking Mahaprasad at Ananda Bazar, he said.

From the ‘Sakala Dhupa’ onwards many dishes will be prepared and will be ready and the President having Mahaprasad in Ananda Bazar will set an example of the Odia culture, he said, adding that selected members of the nijog will be engaged in preparing the Mahaprasad.

The temple will remain closed for entry of devotees during the visit of the President from 10.30 am. Murmu, who is scheduled to visit the temple from 12 noon to 1 pm on the day, will enter through the Simhadwar.

After offering prayers to the sibling deities in the sanctum sanctorum of the main shrine, the President will pay obeisance to Devi Vamala and and Mahalaxmi before proceeding to Ananda Bazar.