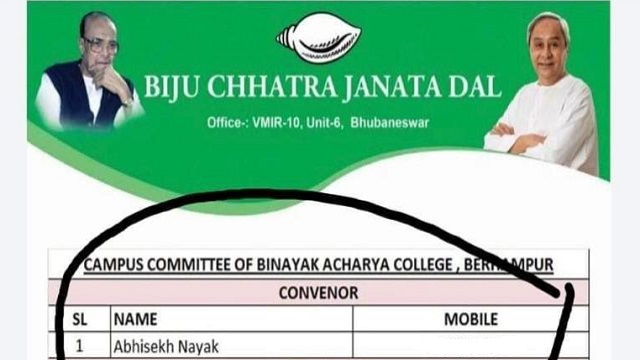 Berhampur: The ragging incident at Binayak Acharya Government College in Odisha’s Berhampur city took a new turn after it was found that the prime accused, Abhisekh Nayak, was reportedly also the convenor of the campus committee of Biju Janata Dal (BJD) students’ wing.

The revelation stoked a controversy with many questioning his appointment and role in the incident since a convenor is responsible for maintaining order on the campus.

Another leader of the student wing claimed that Abhisekh was previously dismissed, though some media reports said that the Berhampur students’ wing president Sovan Nayak has recommended his removal from the post following his arrest to the state president of Biju Chhatra Janata Dal.

Congress leader Pitabasa Panda, on the other hand, alleged that the ruling party had been promoting certain student groups on college campuses and this was the main reason behind the ragging incident.

Notably, the Plus III second-year student is among three arrested by police following a probe on the basis of an alleged ragging video, which had gone viral. He was also arrested by Badabazar police in an assault case in March, sources said.

Meanwhile, the authorities of Binayak Acharya Government College have rusticated 12 students for their alleged involvement in the ragging of juniors.

In the viral video, the accused were seen abusing a Plus II first-year girl student. While they snatched her bag and mobile phone, one of them was also seen kissing her hand in front of other students of the college.