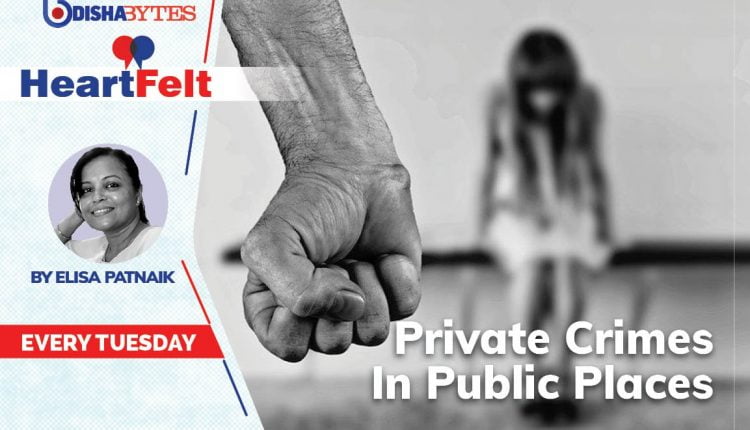 I vividly remember an incident that occurred in Bhubaneswar a few years ago. My close friend along with her friend who was visiting from outside Odisha were travelling in a city bus. Those were the pre Ola and Uber days and public transport was the most common means to commute across the city. After few peaceful minutes, two men sitting nearby started passing lewd comments to the ladies. When my friend and her companion protested, it angered the men and out came a knife.

They started threatening the girls, much to their and other passengers’ shock. But none of them reacted or intervened. The girls moved quickly and asked the driver to stop the bus but to little avail. The men continued with their harassment till the bus was forced to stop near a traffic signal that had turned red. It was then that my friends hastily scrambled out of the bus. They were stunned, shaken and outraged. It took them a few years to get over the incident, the scars of which still linger.

How many times have young girls and women been violated, groped, molested, touched, and gestured at inappropriately, physically assaulted, chased on bikes, shadowed in parks, improperly gazed upon, harassed in public places and spaces? I have a couple of experiences myself and I am sure not a single girl or woman in India would not have a similar experience to narrate. It brings to mind the most horrific crime, the Nirbhaya case that unfolded in the roads of Delhi nearly 10 years ago.

While violence against women in domestic environments and workplaces are now widely recognized as a human rights violation, the different forms of violence and harassment against girls and women in public spaces are often neglected, with few measures, laws or policies in place to prevent and address it.

In India, sexual harassment and other forms of violence against women and girls in public spaces – streets and roads, market places, entertainment centres, public transportations, toilets, parks, events etc. – are an everyday occurrence in urban and rural areas. In most of the cases, women usually deal with it by either trying to swiftly move away from that physical place or bearing the ignominy of it. Others in the vicinity typically choose to ignore it and prefer to look the other side with majority of the incidents going unreported unless they are heinous crimes like rape or murder.

I have seen women cringe at being inappropriately touched in public transports, walk faster when stalked by someone or look away when men gesture lewdly. It is this perceived sense of ‘shame,’ discomfort and the embarrassment of unwarranted attention suffered by women that the culprits take advantage of and continue with their harassment unabashedly.

It is with this compromised sense to protect and guard themselves and the responsibility to keep themselves safe, girls and women learn to manoeuvre public spaces. The onus of safety always falls on them and they are socially conditioned from their childhood to embrace it. Girls are taught early to keep their gaze down, wear appropriate clothes, cover themselves with a dupatta, not to saunter or loiter and enjoy themselves in public spaces.

Within the dominant patriarchal framework with which women in public spaces are controlled, they are often reminded to be extremely aware of themselves, look for trouble, not to venture out when not necessary and reach home early and fast from wherever they are. As a mother to a young girl, I loathe telling my daughter to be careful, vigilant and guard herself, knowing fully well that it diminishes her sense of freedom and inhibits her thinking.

So great is the concern, anxiety and fear of unwelcome sexual remarks and gestures, violence and harassment that rarely do girls and women learn to enjoy the freedom and joy of wandering leisurely in public spaces. Perhaps at times in large groups, but hardly as a single woman on her own.

Single women always seem to be on the move with a sense of purpose in public spheres in India – either travelling in public transport from point A to B, shifting from shop X to shop Y, striding ahead to finish the job at hand and to reach the so-called safe confines of home. They are mostly viewed as mere commuters who travel from their homes to the desired destination or shoppers purchasing stuff for their families.

A lone woman sipping a cup of coffee on the roadside, sitting alone in a park bench, watching a movie, travelling in a city bus late in the evening, or taking a solitary stroll in the night – are all sights which raise eyebrows, unwarranted attention, advice, and touches. Women in public spaces, behaving not within the prescribed limits, are considered to be aberrations. When streets, markets, gatherings and events, public transportation, parks and other public spaces do not have equal representation of women, it reinforces the common misperception that public spaces, by their nature of being public, are unsafe for women.

And, as a result, women and girls have very limited access to the public domain. This not only shrinks their freedom of movement but also adversely affects their ability to participate in social, work and public life, freely and fully. Besides, it also limits their access to essential public services meant for all citizens and their enjoyment of recreational activities. At the same time, victim-blaming and shaming often deter women from reporting cases of gender-based violence.

The Nirbhaya rape case was a watershed event in the narrative on women’s access to public spaces. For the first time in India, the thought that girls and women have every right to be out in the public, safe and not harassed, entered into the public discourse, regardless of the time they are out, clothes that they are wearing or the people they are with.

Girls and women have a right to their cities and to enjoy its opportunities, benefits and services. However, negotiating public spaces is an everyday struggle for women compelling them to either avoid or minimize their use and access to public spaces. Many prefer to blend into the anonymity of city life by not wearing eye-catching clothes or having an attractive demeanour so as to remain invisible thus minimising their visibility and participation.

With these societal, structural, and physical restrictions placed on girls and women under the garb of their safety, the denial of equal opportunity to the public space is also a form of structural violence that girls and women face.

However, there is a growing movement now to reimagine cities as feminist spaces, guaranteeing women and girls equal right to the city. ‘Safe Cities and Safe Public Spaces for Women and Girls,’ initiated by the UN Women’s global initiative few years ago, for example, worked with women’s organizations, governments and others to develop, implement and evaluate approaches to prevent and respond to sexual harassment against women and girls in public spaces in different settings.

Why Loiter – a revolutionary book published nearly 10 years ago talks about women’s access to public places among other things. The three authors make a case for loitering as a fundamental act of claiming public space and, ultimately, a more inclusive citizenship for women.

Incidents of harassment and violence influence the way girls and women experience public spaces. Most of the public spaces, especially in cities, are designed for able-bodied heterosexual and homogenous males with little scope for incorporating the needs, concerns and safety of women, people with disabilities, elderly, and other vulnerable sections.

The reason why public space continues to be patriarchal is not just lack of gender responsive planning but also a social and cultural resistance to make public space inclusive. For example, men are less likely to move and make room for women in a crowded street unless asked to.

It is imperative that laws and regulations need to include specific provisions against sexual harassment in public spaces along with gender-responsive planning. Though unfortunately, both police and urban planning authorities adopt a protectionism approach through surveillance rather than focusing on empowerment of women and access to urban space.

Gender experts dub such measures as paternalistic, reinforcing protectionism due to ‘female vulnerability’ and not necessarily creating an enabling environment for women to access public spaces without fear of being harassed or violence.

In addition, it should recognise that gender and gender relations between women and men are key to how urban spaces are organized and developed. For instance, the way women walk on a pavement is very different from the way men walk. Likewise, public spaces are usually designed based on conventional concepts of gender where men are perceived as breadwinners in the public space and women as home makers in the domestic private spaces.

Nirbhaya Fund specifically designated for “improving women’s safety in the public sphere” is being now leveraged for the Safe City Project implemented in 8 selected cities of India. However, unless and until perceptions on the visibility of women change and the shifting gender roles accepted, these private offenses in public spaces will continue.

Reminiscing Cyclones In Odisha: Eye On The Storm

These 2 Factors Will Stop Cyclone Jawad From Intensifying…