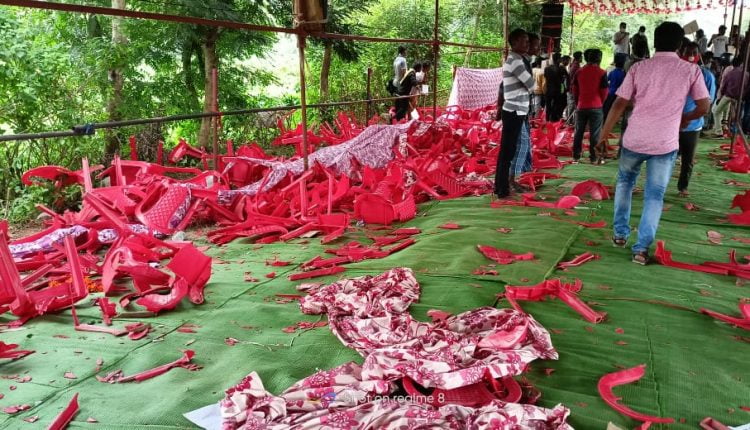 Koraput: The public hearing on mining in Mali hills was cancelled here on Wednesday due to protests by those opposing mining activities on environmental grounds.

The district administration had organised the public hearing on environmental issues regarding the mining lease granted to Hindalco Industries Ltd at Kankada Amba under Semiliguda police station. But the local villagers along with environmental activists strongly opposed the mining in the hills and created disturbances, eyewitnesses said.

Police deployed in the village failed to pacify the agitated villagers and the public hearing had to be cancelled, official sources said.

“The mining activities in the Mali Parbat will not be allowed under any circumstances as we consider it a holy place,” said Dasi Nandibali, a member of Mali Parbat Surakhya Samiti.

The cancellation followed an appeal by Lokshakti Abhiyan, an organisation opposed to mining and protection of the environment, to the authorities to stop the public hearing. In a letter to Member Secretary of State Pollution Control Board, the organisation’s president Prafulla Samantara alleged that the agents of Hindalco, a unit of the Aditya Birla group, were moving from village to village and threatening the activists of Maliparbat Surakhya Samiti not to oppose mining for the last two weeks.

“Today the public hearing was to start at 11 am, but since morning, the police force had been blocking and threatening villagers of different affected villages on the way,” he said.

He also alleged that hundreds of villagers of Daliamba and Kunduli were prevented from going to the meeting place. “This is nothing but the administration’s repressive measures not to allow affected people to give their opinion. It is a conspiracy to make a one-sided show with a few companies supported people and manipulation in favour of mining, which will seriously harm the climate and destroy perennial stream and forest-grown by villagers,” he said in the letter.

Several years ago Hindalco Industries Ltd was granted the lease for mining in 268.11 hectare in the hills surrounded by Aligaon, Sorisa Padar and Kankada Amba villages under Semiliguda and Potangi tehsils of Koraput district. The company targeted to extract 0.6 million tonne of mineral annually from the area. But its effort to mine the hills have so far not been fully successful.

When contacted by Odisha Bytes, a company spokesperson said, “We have no comments on this issue.”