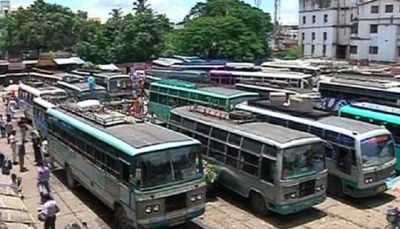 Talking to mediapersons here, secretary of the Association, Debendra Sahu said, while the state government has cancelled the license of the bus driver and the conductor and arrested the accused helper, there is no justification in cancelling the route permit of the bus. “How is the bus owner responsible for the incident when a staff members commits such a crime? How can he know the motive of his staff? This is grossly unfair. We have intimated our decision to the government to reconsider its decision, failing which the Association will resort to an indefinite strike across the state from August 12,” he pointed out.

The incident came to light late at night on July 8 when some locals found the victim crying on the roadside near Saradhabali. The girl then narrated the incident in detail. Later, Kumbharapada police rescued the girl and she lodged a complaint.

The victim had gone to her village in Keonjhar district on leave for some days. On July 8, she had boarded a bus to Puri and was scheduled to get down at Malatipatapur. But as she fell asleep, she missed her destination. By the time she woke up, the bus had arrived in Puri at about 9 pm. As there was no bus from Puri at that hour, the helper asked her to sleep inside the bus. However, he allegedly raped her late at night.

The police had arrested the helper the next day.

Later, the transport commissioner, in a letter to the Regional Transport Officer (RTO) on July 10 had directed that the driving license of the driver and the conductor be cancelled with immediate effect.

Acting on the letter, a show-cause notice was served on the bus owner to reply within 15 days to explain why the route permit of the bus will not be permanently cancelled.

Lady Teacher Beats Up 7 Students For Wrong Answer In Nabarangpur