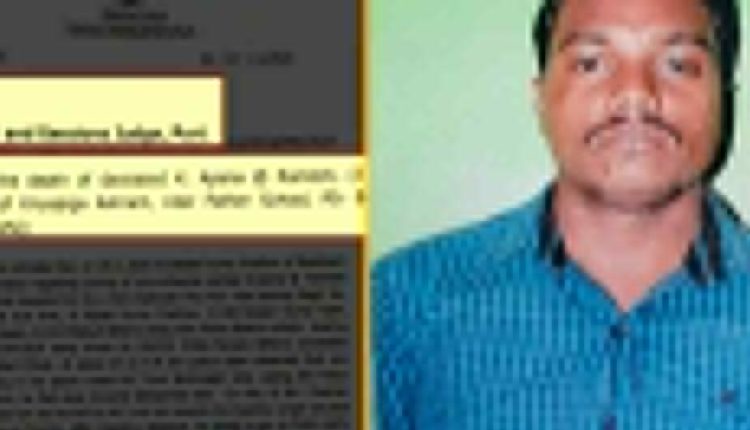 Cuttack/Puri: Here’s a fresh twist to the alleged custodial death of K Ramesh of Puri town. The father of the deceased has reportedly admitted that his son had died after falling on the ground during a scuffle with police. The inquest report bears his thumb impression.

In their affidavit before the Orissa High Court, Puri Police also stated that Ramesh had died from head injuries he sustained after falling on the ground during the scuffle and disciplinary action has been initiated in the matter.

“They (police) apprised the court that Ramesh fell down during scuffle with police and suffered head injuries that led to his death. We countered it as false. The court directed us to file detailed documents and asked us to bring the guidelines of NHRC to court’s notice,” Lawyer Dipak Mohapatra said.

The hearing has been posted for next week.

On November 20, the HC had directed the State counsel Subir Palit to take instructions from the government and file an affidavit on the matter after advocates Dipak Mohapatra and Padmalaya Mohapatra mentioned about a PIL on the death of K Ramesh in police custody.

Puri-based lawyer Sarat Kumar Rayguru had filed the petition seeking court-monitored investigation, immediate action against the erring police officials and compensation to the family of the deceased.

According to the petitioner, Ramesh was arrested and taken to Baselisahi police station on November 18 morning. He was charged under different sections of IPC, including an attempt to murder, and Arms Act. He, however, sustained severe injuries in his head and body in police custody. He died around 8.30 pm while being taken to Puri district headquarters hospital.

The then SP Akhileshwar Singh had told the media that Ramesh was apprehended by Baselisahi police on a tip-off that he was moving around with arms to commit a crime. A scuffle ensued during the operation. He and police personnel sustained injuries. When Ramesh complained of uneasiness, he was admitted to the hospital where he succumbed, he added.

Cyclone ‘Nivar’: Know How The Storm Got Its Name & Who Suggested It