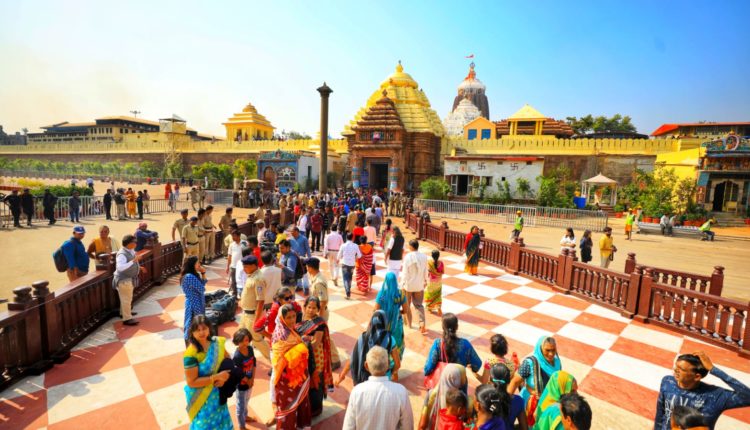 Bhubaneswar: The Puri Heritage Corridor project has turned into a big political issue after the Archaeological Survey of India (ASI) told the Orissa High Court that there was no permission or no-objection certificate (NOC) for the ongoing construction around the Jagannath Temple, putting a lie to the state government’s claims that the work had the ASI’s and the National Monuments Authority (NMA)’s sanction.

Several opposition leaders targeted the BJD-led state government for carrying out massive construction both in the prohibited and regulated areas around the 12th-century protected monument without the ASI’s permission, posing a threat to the temple. The opposition parties also blamed the ASI for not intervening before.

“After the ASI’s affidavit, it is clear that the construction being carried out under the project is illegal. The ASI is also to be blamed for not inspecting the construction. The ASI’s report is a shocker. But why did it not seek a stay order? Why did it not file a case against the Odisha government if the work is illegal,” asked BJP leader Bijoy Mohapatra.

BJP leader and Puri MLA Jayant Sarangi urged Prime Minister Narendra Modi to intervene and save the temple. “Whatever has been damaged cannot be brought back to its original form. The government must ensure there’s no further damage to the structures. Locals, mutt mahants, servitors, no one is happy. Courts cannot resolve this, the PM should intervene and save the temple,” he said.

Slamming the Naveen Patnaik government, BJP leader and Bhubaneswar MP Aparajita Sarangi, who was at the forefront of the faceoff between the BJD government and the opposition parties over the project, tweeted, “So much of public money is being spent on forcibly creating infrastructure which could easily be created beyond 100 metres. If the structures are declared illegal tomorrow who will be responsible for wastage of hundreds of crore of rupees which is the hard-earned money of Odias?” she said in another tweet.

“After filing of ASI’s affidavit before the Hon’ble High Court, I am convinced that Lord Jagannath is trying to save Himself and His temple from an elected State Government which is hell bent upon brazenly defying the law,” she said.

BJP national spokesperson Sambit Patra too hit out strongly at the Odisha government. “State govt carried out construction works without approval from competent authority. Isn’t this illegal? Who is answerable?” he tweeted.

“ASI mentioned about frequent changes in DPR. Why was DPR revised so many times?” he asked. “Most important of all, it’s mentioned that excavation may have destroyed archaeological remains of heritage site. Govt should answer who is responsible for this,” he said.

Patra also attacked BJD leader and Puri MP Pinaki Mishra. “In Lok Sabha, Mishra said that only four toilets are being constructed in restricted zone of Jagannath temple. Mishra should apologise for this blatant lie,” he said.

The Congress also attacked the Naveen Patnaik government. “The ASI said it has not given any approval for construction. The HC should have issued stay orders after the ASI submitted its report. The House Committee formed to inspect the site is yet to visit the spot. I’ll write to the Speaker in this regard,” veteran Congress leader Narasingha Mishra said.

After Centre’s U-Turn, SC Asks If Sedition Cases Can Be Kept At ‘Abeyance’ Till Re-Examination