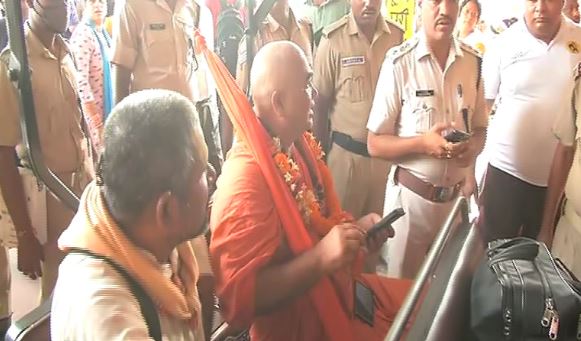 Puri: The visit of Adhakhyananda Debatirtha, self-proclaimed Shankaracharya of Gobardhana Pitha, to Puri was opposed by local activists on Monday. He was detained at the station here for more than 30 minutes soon after Debatirtha alighted the Howrah-Puri Superfast Express.

According to reports, members of Aditya Bahini, a local outfit, workers of Gobardhana Pitha raised slogans against Debatirtha soon after he reached the Puri station.

Alleging that he is playing with the religious sentiments of Hindus, the activists said Debatirtha claimed himself to be the Shankaracharya of Gobardhana Pitha and availed the benefits of railways along with Government Railway Police (GRP) security.

They denied him entry to Puri. However, police, GRP and Railway Protection Force (RPF) rescued and took him to Balasore Ashram outside Puri town.

The workers of Aditya Bahini and Gobardhana Matha have lodged a complaint before the district administration in this regard.

Swami Neeschalananda Saraswati is Shankaracharya of Puri, according to the Govardhan Peeth’s official website. Debatirtha’s claims had led to controversy in the past too.

In 2014, the Swami had announced to campaign against Prime Minister Narendra Modi in Varanasi. Similarly, in October 2015, Adhokshjanand gifted a cow to the then Uttar Pradesh Minister Mohammed Azam Khan.