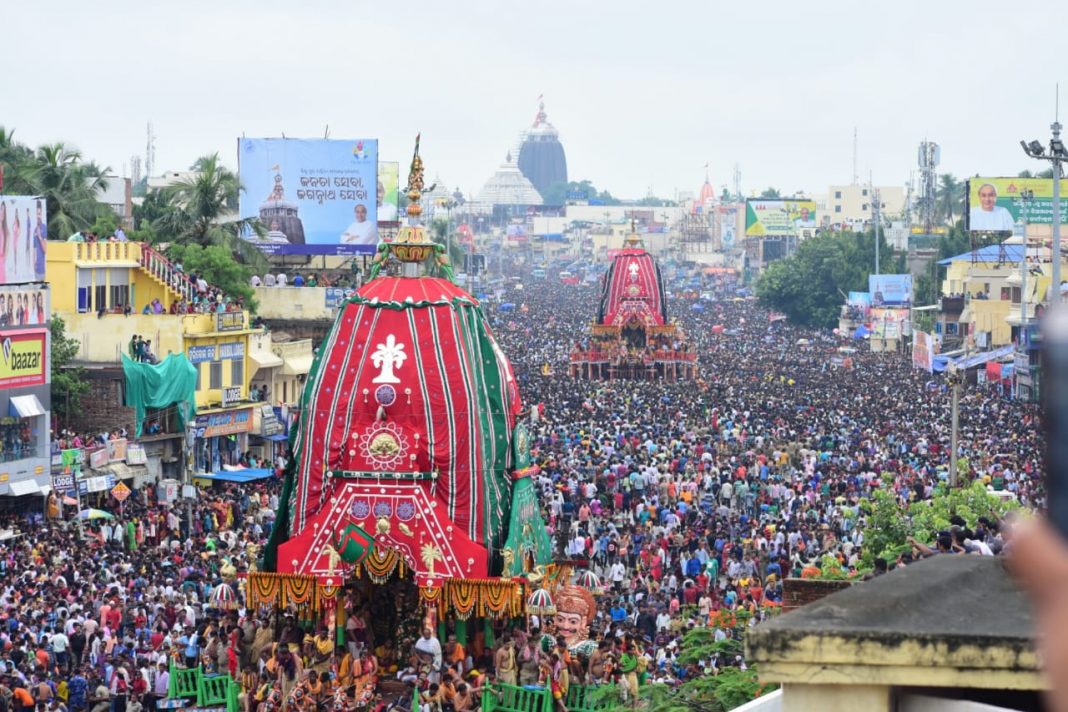 Puri: The much-awaited Rath Yatra in Puri was celebrated with religious fervour on Saturday without any untoward incident.

For the first time, the pulling of the chariots began about 90 minutes early due to the timely conduct of rituals by the servitors.

The pulling of chariots scheduled at 4 pm, began at 2.35 pm.

After performing the Mangala Alati, Mailama Lagi, Tadapa Lagi and Rosa Homa, Abakasha Niti, Surya Puja and Dwarapala Puja, Besha Sesha, Gopala Ballabha and Khechudi Bhoga, Ratha Pratistha, and Mangalarpana, the Pahandi (line procession) of the Lords began at8.50 am as the Daitapati servitors brought Lord Sundarshan and placed him on the Darpadalana, the chariot of Goddess Subhadra, at about 9.45 am. This was followed by the Pahandi of the Lord Balabhadra at 9.25 am and Devi Subhadra at 9.45 am. The servitors later began the Pahandi of Lord Jagannath at about 9.55 am.

After the Pahandi was over at 11.55 am, the idol of Lord Madanmohan was put beside Lord Jagannath on the Nandighosa chariot at12.50 pm.

As scheduled, Shankarcharya of the Gobardhan Peeth, Swami Nischalananda Saraswati arrived with six followers and performed the rituals of the Lords on the three chariots at 1.05 pm.

The Chhera Panhara (sweeping) of the chariots began at 1.25 pm by the Gajapati Maharaja Dibyasingh Deb which concluded at 2.15 pm.

The pulling of the chariots began at 2.35 pm after the servitors removed the Charamala (ladder made of palm wood) from the chariots at 2.25 pm.

The pulling of Taladhawaja chariot of Lord Balabhadra began at 2.35 pm while the chariot of Devi Subhadra and Lord Jagannath pulled at 3.15 pm and 4.10 pm respectively.

The Taladhwaja and Darpadalana chariots arrived at the Saradhabali near Shree Gundicha Temple at 6.05 pm and 6.10 pm respectively.

However, the pulling of Nandighosa chariot was stopped near Balagandi Chhak at 6.20 pm due to sunset.

The chariot would be pulled at about 10 am on Sunday. Thereafter, the three deities would be taken on Pahandi to the sanctum sanctorum of the Shree Gundicha Temple on Sunday.

Elaborate security arrangements were made to ensure smooth conduct of the mega festival.