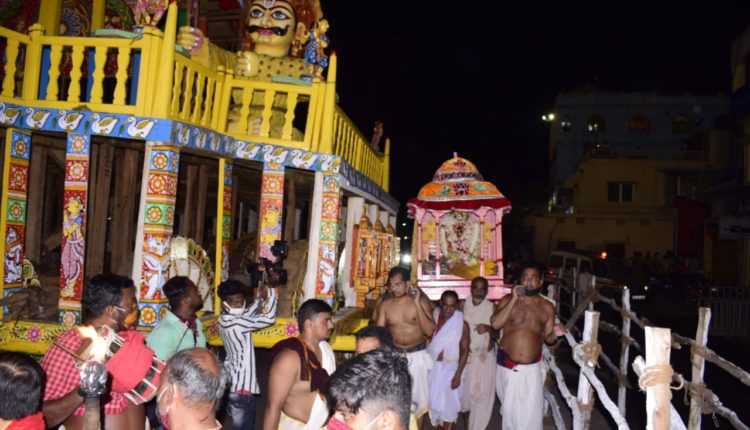 Puri: Like every year on the fifth day of Rath Yatra, Hera Panchami, a ritual when Goddess Laxmi steps out of Srimandir and visits Gundicha Temple to threaten Her husband Lord Jagannath to return to His original abode, was celebrated here on Saturday without public participation due to COVID-19 pandemic.

However, according to servitors and researchers, this year’s Hera Panchami was different. “Though Hera Panchami was celebrated on Saturday, it was not Panchami going by the Panji (Hindu almanac),” pointed out Subas Pani, a well-known Jagannath scholar. “Hera Panchami is celebrated on the 5th day of Rath Yatra or Gundicha Yatra, which happens on Asadha Sukla Dwitiya, second day of the bright fortnight of Asadha. Normally it should be on Sasthi going by the lunar calendar, but in 2020 it was on Sasthi and Saptami,” he said.

While not many would be aware that Hera Panchami usually falls on the sixth day of the full moon in Asadha, the fact that it took place on Sasthi and Saptami this year has become a point of discussion in the pilgrim town. “As Rath Yatra falls on the second day of the full moon in Asadha, Hera Panchami rituals, conducted on the fifth day of the festival, normally falls on Sasthi,” noted author and Jagannath culture researcher Bhaskar Mishra told Odisha Bytes.

Panchami being the fifth day of the month, most people observe Hera Panchami on the Panchami and that is why some temples in Odisha celebrated it on Friday instead of Saturday, Mishra said.

Hera Panchami is one of the most interesting rituals of Rath Yatra as Goddess Laxmi expresses Her anger at being left alone in the Srimandir with Lord Jagannath, Lord Balabhadra, Goddess Subhadra spending time at Gundicha Temple. Goddess Laxmi comes in a palanquin and asks Her husband to return to Srimandir. Lord Jagannath gives His consent in the form of a garland.

Mishra further said usually Suna Besha (golden attire) of the deities is usually on Ekadasi (11th day) a day after the Bahuda Yatra. But as Sayana Ekadashi falls on the day of Bahuda Yatra, the Ekadashi rituals this year will be performed atop the three chariots and Suna Besha will be held on the following day, i.e., July 2.