Rain, Thunderstorm From April 8 To Bring Down Temperature In Odisha 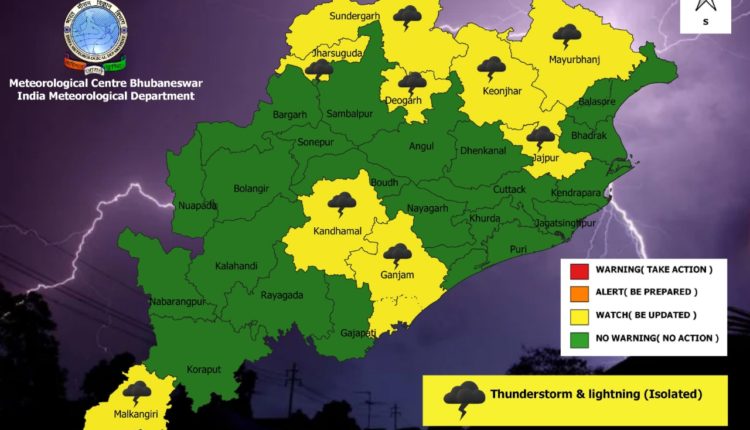 Light to moderate rain with thundershower is likely to occur in some parts of Jharsuguda, Sundargarh, Deogarh, Keonjhar, Mayurbhanj, Jajpur, Ganjam,
Kandhamal and Malkangiri from 0830 hrs of April 8 to 0830 hrs of April 9.

From 830 hrs of April 9 to 830 hrs of April 10, the IMD has forecast thunderstorm with lightning and hail with gusty surface wind speed reaching 30-40 kmph at one or two places over the districts of Keonjhar, Mayurbhanj, Dhenkanal, Jajpur, Cuttack,
Balasore, Bhadrak, Gajapati, Ganjam, Angul and Khurda.

From 830 hrs of April 10 to 830 hrs of April 11, the districts of Gajapati, Ganjam, Kandhamal, Malkangiri, Koraput and Mayurbhanj are likely to witness thunderstorm with lightning accompanied with gusty surface wind speed reaching 30-40 kmph.

In view of the IMD warning, the SRC has issued an alert to the collectors of respective districts asking them to circulate warning message among the public and closely monitor the situation to meet any eventuality.

Heat Wave To Prevail For Next 48 Hours

However, heat wave will continue to make life miserable in some parts of the state in the next 48, the IMD stated in its bulletin.