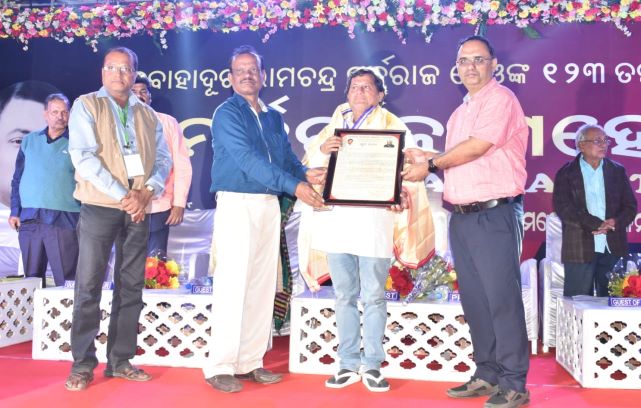 Berhampur: Eminent educationist and founder of Kalinga Institute of Industrial Technology (KIIT) and Kalinga Institute of Social Sciences (KISS) at Bhubaneswar Achyuta Samanta was conferred Ramchandra Mardaraj Award 2023 in recognition of his contribution to the field of education during ‘Mardaraj Mahotsav-2023’ held at Berhampur in Odisha’s Ganjam district on Thursday.

Expressing his gratitude to the Mardaraj Mahotsav Celebration Committee for the honour, Samanta, who is also Lok Sabha MP from Kandhamal, praised Raja Bahadur Ramchandra Mardaraj Deo for his foresight to promote education and develop irrigation system in Ganjam.

Eminent historian Ashok Kumar Rath, who was also felicitated on the occasion, suggested that an important road or an area in Berhampur should be named after Raja Bahadur Ramchandra Mardaraj Deo. The life and times of the former king should be included in the history syllabus of higher education, he added.

Mardaraj Mahotsav has been held every year from January 11 to 13 commemorating the birth anniversary of Ramchandra Mardaraj Deo (1900-1963) at Khallikote since 2007. From 2008, it was held for one day at Bhubaneswar on January 13.

It has been organised at Berhampur for the first time this year as per the wish of Khallikote queen V Sugyan Kumari Deo, according to Dr Saketh Rama Rao, acting president of Mardaraj Mahotsav Celebration Committee.

A commemorative postage stamp of the Department of Posts on Mardaraj Deo was released by Berhampur MP Chandra Sekhar Sahu at Chatrapur Head Post Office on the day.