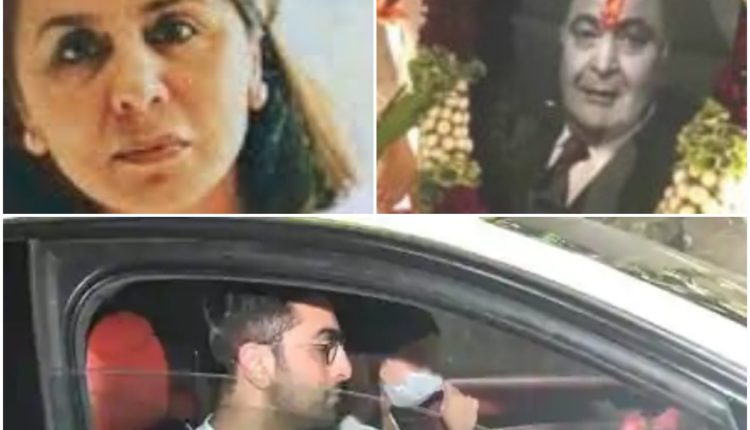 The Kapoor family held a prayer meet for Rishi at their residence on Tuesday (Mat 12) and son Ranbir was seen arriving there with girlfriend Alia Bhatt.

The fact that Ranbir hasn’t stayed with mom Neetu Kapoor to offer her emotional support during this difficult time, didn’t go down well with netizens.

After photos of Ranbir arriving at his house went viral, netizens started trolling him for not staying with his mom.

@kimonudeuri: “Why is he not staying with his Mother during such a situation.”

@sidhibhandarkar: “Y isn’t he living with he’s family ridhmaa came all over from Delhi very sad!”.
@samrastars: “Ranbir should be at home with mother. She always loved him. Why did he leave his mom.”

@syedashizahassan: “Stay with your mom Ranbir.” .

@indhusha_selvarasu: “But it’s a tym he should be with his mom and sister.. well that’s his wish and… seems like alia and ranbir are serious about their relationship”.

Karisma Kapoor, Shweta Bachchan Nanda and her daughter Navya Naveli Nanda, Randhir Kapoor and his wife Babita Kapoor, Armaan Jain and his wife Anissa Malhotra, and Rima Jain were among others who attended the prayer meet.

Veteran actor Rishi Kapoor breathed his last on April 30, 2020, after a two-year battle with leukemia.

Beat The Heat: Chill At Home This Summer With These Easy To Make ‘Breezers’