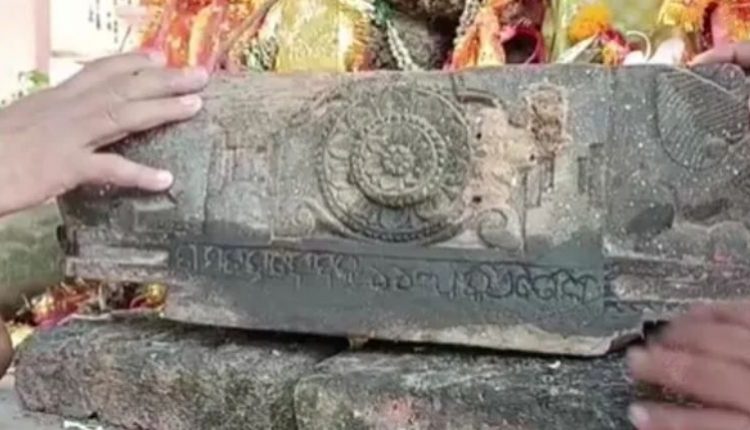 Bhubaneswar: Throwing new light on Odisha’s rich heritage, a rare wooden inscription engraved around 170 years ago has been found at a temple in Delang area of Puri district.

The wood-carved script in Odia, which remains legible, was found by a 3- member team from the Indian National Trust for Art and Cultural Heritage (INTACH) in Paschima Somanath Temple of Harirajpur village in Delanga Tehsil of the district

The team, led by Project Coordinator noted historian Anil Dhir, chanced upon the discovery during the survey of the archaeological remains and monuments in the Daya-Ratnachira River valley. Harirajpur is near Khurdagada, the Fort which was the capital of Bhoi Dynasty.

The wooden inscription written in Odia tells about the 44th Anka (Regnal year) of King Ramachandra Deva III. Inscribed on the carved and decorated wooden block are the words ‘Ramachandra Debanka 44 ankare Tolaa’ which denotes that the temple was reconstructed during the 44th regnal year of the king.

According to the “Khurda Itihasa” written by eminent historian Kedarnath Mohapatra, the Bhoi Dynasty had four rulers, each named Ramachandra Deva. Of them, only Ramachandra Deva III had ruled for above 44 regnal years (from 1817 to 1854, the others having shorter reigns.

So it is clear that it was during 44th Anka of Gajapati Ramachandra Deva-III, sometime in 1852-53  when this wooden Mandapa was constructed by him in front of Paschima Somanath Temple, said Dhir.

The inscriptions are engraved on a wood block which was originally installed in the Bhogamandapa in front of the main shrine. While the wooden structure had crumbled down, this inscribed wood block was kept in a subsidiary temple before it was spotted by the INTACH team.

Noting that finding a carved wooden block in pristine condition is rare, Dhir said while copper plate and rock cut inscriptions last a long time, wooden inscriptions are rare as being organic, they deteriorate and wither away. There are very few wooden temple in the state which have wooden inscriptions.

This temple is very close to the spot where the Utkal University team led by Dr Kishore Basa had unearthed two skeletons and other archaeological artefacts a few years back. The findings of the study were indicative of very early settlement in the area.

Dhir further said that many artefacts and archaeological remnants of early period temples are found in the area. Unfortunately, most of the fort walls of the Khurdagarh Fort have crumbled and the stone blocks have been carted away. The natural moat, which existed on three sides of the fort is now being filled up. The team has also discovered ancient step-wells in the vicinity.

A proper and detailed survey of the area by the ASI or the State Archaeology should be undertaken as it will yield a lot and the existing heritage should be protected, the historian added.

Over 4,000 Fake Enrollment Of Students Found In Primary Schools Of Odisha’s Jagatsinghpur