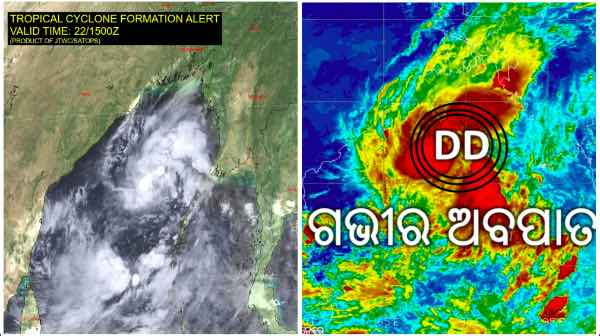 Bhubaneswar: Cyclone ‘Sitrang’ is likely to form over the central Bay of Bengal in the next 12 hours, the India Meteorological Department (IMD) informed on Sunday.

“The depression over eastcentral Bay of Bengal moved northwestwards with a speed of 17 kmph during the past 6 hours and intensified into a deep depression and lay centred at 5.30 am over the same region about 580 km northwest of Port Blair, 700 km south of Sagar Island and 830 km south of Barisal (Bangladesh),” it said.

It is very likely to move northwestwards during the next 12 hours and intensify into a cyclonic storm over central Bay of Bengal. Thereafter, it would recurve and move north-northeastwards and cross Bangladesh coast between Tinkona Island and Sandwip around early morning on October 25, the MeT office added.

The system may attain a maximum sustained surface wind speed of 90kmph gusting to 110 kmph while making landfall as a severe cyclonic storm.

Fishermen have been advised not to venture into the sea along and off Odisha coast and west-central and North Bay of Bengal till October 25. Distant Cautionary Signal No.1 (DC-1) has been hoisted at all ports in the state.

US Joint Typhoon Warning Centre (JTWC) has also issued an alert for tropical cyclone formation. “The potential for the development of a significant tropical cyclone within the next 24 hours is high,” it said, adding that it will make landfall in Bangladesh.

According to senior meteorologist Jason Nicholls, cyclonic storm ‘Sitrang’ is likely to form over Bay of Bengal by Monday and then strike Bangladesh around Tuesday.

Private weather forecaster Skymet said that the system will intensify into a cyclonic storm by either Sunday late night hours or early morning hours of Diwali. “During this process, the system will move northwestwards. As it approaches the intensity of a deep depression, it will begin to take a northward track. When the system does become a Cyclonic Storm, it will start moving north-northeastward,” it said, adding, “North Coastal parts of Odisha including Balasore, Baripada will see some squally winds and outer bands of the system will be seen skirting the coast.”

According to SOA’s Centre for Environment and Climate (CEC), the system will change its direction and move north- northeastwards on Sunday. It is likely to intensify into a cyclonic storm on October 24 morning and its movement in the north-northeastwards will continue till landfall along the Bangladesh coast late on October 24 or early next morning.

“Based on Saturday’s model products, the cyclone will move parallel to the Odisha coast with a distance of more than 150 km from the coast, so the wind speed may not be very high and vary from 60 to 80 kmph over Odisha coast,” CEC director S C Sahu said.