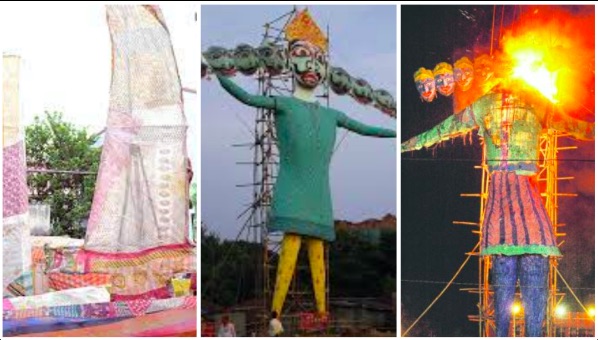 Bhubaneswar: With the Odisha government allowing puja mandaps to organise Ravana Podi on Dussehra, the spectacular show of fireworks will be held on Wednesday at four places – Baramunda, Jharapada, Koradakanta and Pahala – in Odisha capital, after a gap of two years due to COVID restrictions.

The Demon King being set ablaze and falling to the ground is a sight to behold. The colourful fireworks add to the fun. But did you know Subhorani is the only woman in Bhubaneswar making Ravana effigies for over three decades and contributing to this fiery end to Dussehra?

Her family of artists shifted to the city from a small village in Khurda district, about 40 years ago. Although the number of orders she received was less compared to pre-COVID times, the family have been at the job for over two months now.

They have created around a 50-foot high Ravana effigy for Baramunda and between 35 ft to 40 ft high for Naharkanta in the city and Jatni, Bankuala and Koradakanta in Khurda district. Around 20 old stock sarees bought at half the cost are used on one effigy. These are dipped in the glue and spread over the bamboo frame. Distemper is used instead of water colours to prevent the colours from getting washed away in the rain.

She had made the first effigy about 35 years back for Saheed Nagar having learnt the craft from her father-in-law and further honed her skills at Kala Niketan. The family makes at least Rs 15,000 to Rs 25,000 from making effigies, depending on their sizes.

Five platoons of police force have been deployed in the city for smooth conduct of the ritual. For traffic management, vehicular traffic on NH-16 from Cuttack will also be diverted from Jayadev Vihar to CRP Square via Behera Sahi, Shastri Nagar, Power House and Unit-8 DAV crossings. No one will be allowed within 100-metre radius of the site and barricades set up to prevent authorised entry.

The puja committees were earlier directed to procure firecrackers for burning the effigies from licensed cracker shops, sources said.