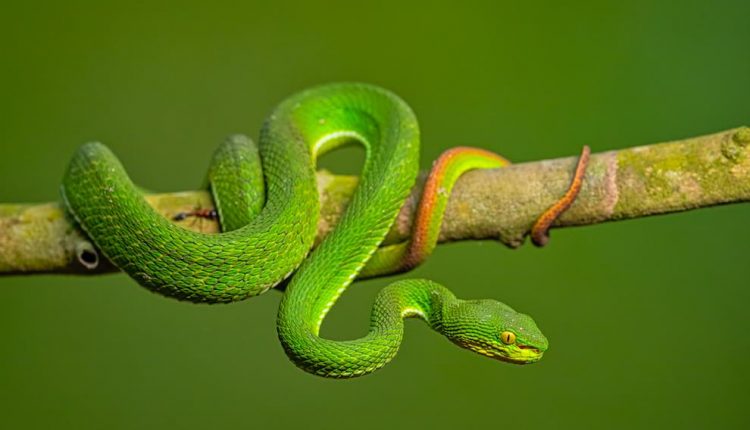 Bhubaneswar: A new snake sighting has been recorded for Odisha with the photographic documentation of Red-tailed Pit Viper (Trimeresurus erythrurus) at Bhitarkanika National Park.

Talking about the sighting, Panchami Manoo Ukil, a well-known birdwatcher and conservationist, said, “We had ventured out at night to spot owls and look for the Green Vine Snake. We noticed the Red-tailed Pit Viper curled on a branch and on a closer look, realised that it was a pit viper. Of course, we had no idea that the sighting was a first for Odisha and I am happy that the presence of this beautiful species of snake is now recorded in the snake list of Odisha.”

The Red-tailed Pit Viper belongs to the subfamily Crotalinae, a group of venomous vipers, distinguished by the presence of a heat-sensing pit organ in the middle of the head, between each nostril and eye. Sensitive to infrared radiation, the organ allows these reptiles to detect and hunt warm-blooded prey even in complete darkness.

It is believed that India is home to more than 28 species of pit vipers, restricted to the high rainfall areas of the Western Ghats, the Himalayas, the Northeast and the Andaman and Nicobar Islands. Being highly venomous, pit vipers are feared by humans and persecuted on sight, which remains one of their most severe threats.

In India, the pit viper species are mainly seen in Assam and Sikkim, although they have also been spotted in the Sunderbans and parts of Arunachal Pradesh, Nagaland as well as in Tripura. Like other pit vipers, they feed on small amphibians and mammals.

The spectacular photographs by the duo clearly show a different body pattern than the more commonly seen Bamboo Pit Viper (Trimeresurus gramineus) as described in the book “Snakes of India: The Field Guide” by Romulus Whitaker & Ashok Captain.

Although the latest book describing the Bamboo pit viper, i.e.  ‘Snakes of Central India”‘ published in 2021 states that “juveniles have a reddish tail”,  the snake that Panchami photographed was certainly an adult since the length of the specimen was approximately around 3 ft. The Bamboo Pit Viper snake attains adulthood with a length of 400 mm (16 inches) as per Whitaker & Captain.

Subhendu Mallik, General Secretary, Snake Helpline and Honorary Wildlife Warden, Khurda, said, “In the first impression the adult snake does not look like a Bamboo Pit Viper to me. Rather it resembles the green pit vipers with a red tail, such as a Red-tailed Pit Viper thereby great documentation for the snake list of Odisha. However, the exact species can be ascertained only after the detailed physical examination, morphometry and body scale count of the specimen.”