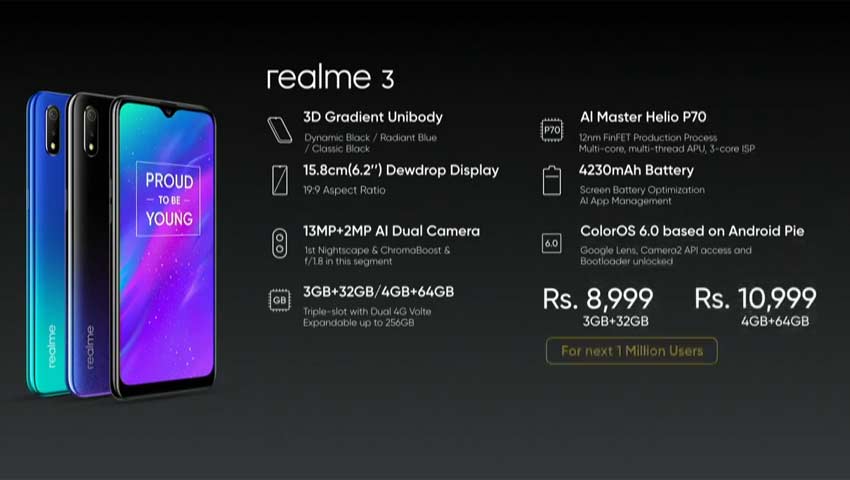 New Delhi: Realme, Oppo’s missile for Xiaomi, has launched the 3rd generation Realme 3. On Monday, Realme CEO Madhav Sheth aggressively compared its performance with Redmi, even taking a jibe at Redmi, saying they do not sell ads in the UI. He mentioned that Realme had sold 5 million units in just nine months and the company was already at number 4 (in sales volume).

The prices are as follows:

Design has been a priority for Realme, and apart from diamond-cut design, the company has launched back covers in multiple colours as well. There is a yellow ring on the camera lens.

The phone has a 6.2-inch HD+ display, is powered by MediaTek Helio P70 SoC, and come with a 13-MP + 2-MP dual rear camera and 13-MP front camera. The camera app has ‘Chroma Boost’ mode, which improves the dynamic range when shooting backlit subject and ‘Nightscape’ mode, which takes a long exposure shot to improve details on low-light photos.

Like the previous Realme, this one also comes with a large 4,230mAh battery. The company claims that using AI app management, the battery lasts longer than normal 5,000 mAh battery phones.

The company is betting big on gaming and showcased Free Fire on the phone at the launch event. They claimed that the benchmark scores on Realme 3 are almost double of Redmi.

The phone is available in black and blue colours and the company has also launched back covers called ‘Realme 3 Iconin Case’ for Rs 599. The first sale of the Realme 3 is at noon on March 12.

The company is expanding and is currently present at 3000+ stores. They also announced that the Realme 3 Pro will be launched in April.