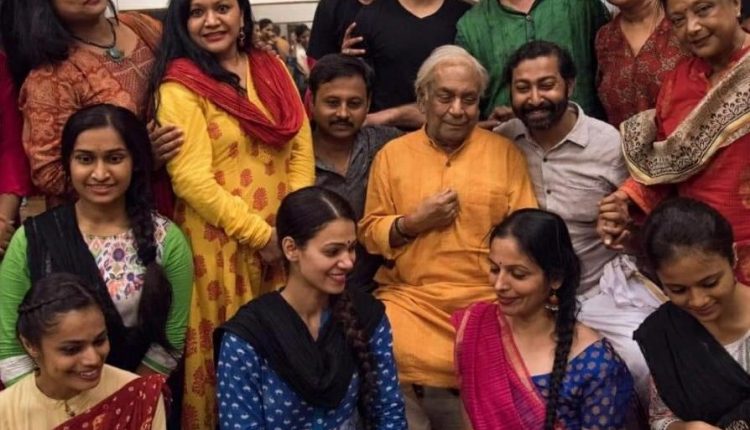 At around 2 am on Monday that my phone rang many times, but was unanswered. It was my friend from Montreal (Sudeshna, one of the senior disciples of Pandit Birju Maharaj ji), who had called me to inquire if the news about Maharaj ji is correct or not. I saw the news on TV and social media… Didn’t know how to react.

He had not been keeping too well for quite some time, but it’s very hard to believe that the legend is no more.

Maharaj ji touched everyone’s heart with his simplicity, knowledge and divine character. I’m associated with Kalashram, his dream institution of Kathak in Delhi, for the last 20 years. I have had the opportunity to perform dance (Odissi) in solo, duet and group form as well on many occasions of Kalashram’s major dance festivals.

In 2008, Birju Maharaj Ji’s seniormost disciple Saswati Sen called me to perform in their Basant Utsav, mentioning that the music for the piece will be composed by Maharaj ji himself. My happiness knew no bounds. My son was very young then. I was apprehensive about how to manage with him as I knew it’s going to take time for rehearsals and everything.

Saswati didi suggested that I should get my child along for rehearsals as he should also know what his mother does and be aware that nothing comes on a platter. It was such a relief, but I wasn’t sure whether my son would adjust there or not. But to my surprise, he had a great time sitting beside Maharaj ji during the entire rehearsal session.

The child-like behaviour of Maharaj ji is worth mentioning here. He used to become a child with kids all the time. He patiently listened to children and said he always learnt expressions from kids as they’re the purest in their expressions.

Maharaj ji used to love rabri. I am so fortunate that I could offer him rabri many times when I visited Kalashram.

In 2018, I also had the opportunity to perform Kathak-Odissi duet duet with Maharaj ji’s niece Ipsita Mishra on the occasion of Maharaj’s 80th birthday celebrations in Kamani Auditorium, New Delhi. The topic given to us was ‘Surya’. After the performance, we went to touch his feet and got blessings from him.

I was also fortunate enough to organize the inaugural event of Bajirao Mastani, the musical by Lokchanda cultural unit at Natya Ballet Centre, New Delhi, two years back. Maharaj ji wasn’t keeping well then. So we had to take extra care of him, planning for his sitting area, food and making sure that he was away from the group.

Today, as I remember this great soul, all these fond memories flash in front of my eyes. He was a saint, a knowledgeable guide, a poet, a profound musician, a person full of divinity.

Sat sat naman to a great soul. His demise is a great loss to Indian music and dance fraternity. Rest in peace. Pranam Maharaj ji.

* A descendant of the Maharaj family of Kathak dancers, which includes his uncles Shambhu Maharaj and Lachhu Maharaj, and his father and guru, Acchan Maharaj

* He also practised Hindustani classical music and was a vocalist

* After working with his uncle Shambhu Maharaj at Bhartiya Kala Kendra (later Kathak Kendra) in New Delhi, he headed the centre for several years, till his retirement in 1998 when he opened his own dance school, Kalashram, also in Delhi

* Conferred with Padma Vibhushan in 1986

* Honoured with Kalidas Samman in 1987

High Drama In Odisha Capital: Bank Locks Hotel With Owner (Who Defaulted On Loan) Inside