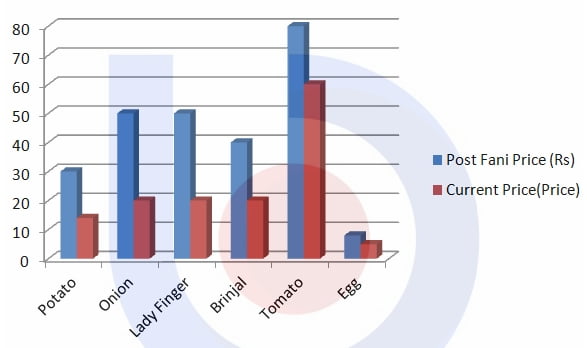 Bhubaneswar: Whether it is a natural calamity or a man-made disaster, the market forces are always at play losing no opportunity at milking the customer. Somehow, they manage to upset the cart and create an artificial inflation by controlling the supply and creating an unnatural demand. It is ironic how they manage to have the last laugh in an adversity.

The city of Bhubaneswar, which also fell prey to this artificial demand-supply cycle, is steadily coming back to normalcy with restored power supply, mobile and internet connections. The prices of milk, vegetables and other essential goods, that had risen astronomically have become more realistic now.

People felt the pinch soon after the catastrophe caused by Cyclone Fani as milk,  that used to cost them Rs 20 for half-a- litre was available at prices between Rs 30 and Rs 40, while curd and other dairy products such as paneer and cheese vanished from the market in the absence of power supply and could not be stored to keep them fresh.

The scenario has changed now with such products easily available in the markets now. “It was nothing but loot by the vendors. Forget bigger shops, even the neighbourhood shops were selling things at double the price. The situation was worse on May 4 and 5,” said Sumit Ojha, a resident of Nayapalli.

Presently, vegetables such as potatoes are available at Rs 14 per kg instead of Rs 30 then, while the price for a kilogram of onion

Small scale vendors and wholesalers use every excuse in the world to justify their action and indulge in blame game. “What can we do. We also need to recover what we invested. I had lost most of my daily customers in the process but I was helpless,” said Pappu Jena, a grocer in Bomikhal.

Odisha Byabasayi Mahasangh General Secretary, Sudhakar Panda, on the other hand said that the supply of vegetables was disrupted due to failed power and cell phone connection in the city. “The government was to be blamed for this. We sold vegetables at normal prices but they were hiked at the retail level,” asserted Panda.

Not only vegetables and other items of daily need, inflation had also hit the poultry business, with Rs 8 per egg instead of Rs 5 in general, chicken was being sold at Rs 300 per kg instead of Rs 200 before the cyclone hit the state. Much to the relief of the people, the prices of these items are also back to normal.

“We were not being able to procure enough stock, which gave rise to the prices of poultry items. However, the supply is normal now with restored cell phone and power connection. The fish market was the worst hit since they were not being able to store fish in the absence of power supply,” said Pabitra Mohan Das, a chicken seller at Kochilei Haat in Rasulgarh.

Kharvel Nagar resident Surekha Mohanty, said that she has never seen such high prices of vegetables in the city. “I had bought beans at Rs 150 per kg, which is almost double the normal price. I had never imagined such prices but thank God, things are normal now,” she said.

Raghurajpur Artists Village Reverberates With Life Despite Onslaught Of Nature