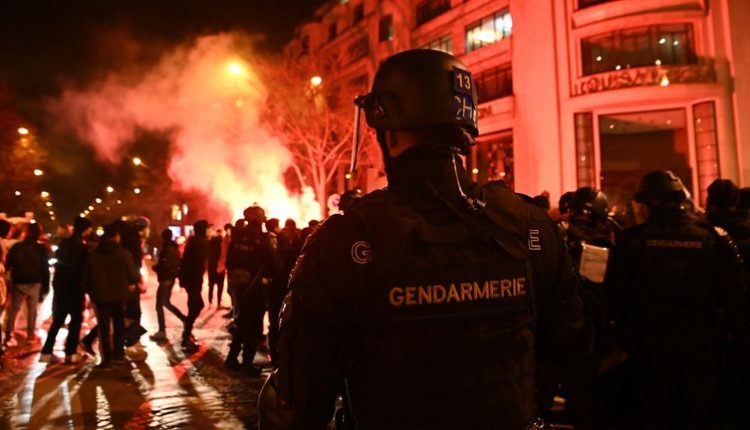 Paris: Riots broke out in Paris and other French cities after France lost to Argentina in the FIFA World Cup Final in Qatar Sunday night. French police fired tear gas on football fans, while they clashed with fans on the famous Champs-Elysees in Paris as flares were lit up and fireworks hit the skies after the tense game, The Sun reported.

According to local reports, people gathered in bars and restaurants to watch the match as rowdy fans chanted and hundreds of honking cars paraded and people waved flags from the windows.

Thousands of French football fans had assembled in Paris and other French cities hoping for the victory of their team in the World Cup final, but their loss to Argentina cut the parties short. A thrilling match in Qatar finished 3-3 after extra time before France lost a nail-biting shootout to Lionel Messi’s Argentina side 4-2.

Clashes were also reported in other cities in France where football fans descended on the streets in Lyon and Nice.

Visuals showed people darting for cover as fireworks were flung across a square. In Lyon, riot cops fired tear gas on football fans as violence broke out in the city.

Several social media users put out videos of chaos on the streets of Paris and Lyon as people flee the tear gas shells fired by the police.

The police could be heard yelling “turn around” at rioters as water cannons reportedly moved in to break up the crowds, the report added. Police have reportedly arrested dozens of fans in Lyon.

In the French city of Nice, videos showed emergency vehicles driving over burning rubbish bins on the street as clashes erupted in the city.

On the other hand, the scenes near the Argentine embassy in Paris were different. At the embassy, a few blocks from the iconic Arc de Triomphe monument, dozens of Argentinian fans erupted in joy after the victory.

Earlier on Sunday, over 14,000 police officers were deployed across France to guarantee security as Les Bleus took on Argentina in the World Cup final.

Riots have erupted across Europe after several World Cup games in recent weeks.

[Watch] Under Construction Bridge Collapses In Bihar Before Inauguration

Special Arrangements For Inmates Of Nandankanan Zoo In Bhubaneswar During Winter