Rise In Infection Among Servitors, Stringent COVID Protocols To Be Enforced In Odisha’s Puri 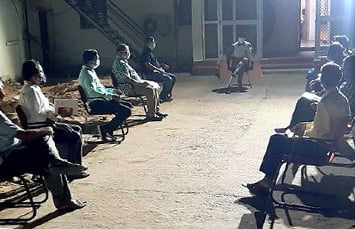 Puri: Collector Balwant Singh here on Monday said that more than 600 persons from servitor community of Jagannath Temple in Puri have tested positive for COVID-19 and most of them have recovered.

“There has been a fall in the infection rate among them with only 29 in two COVID Care Centres, but there is no room for any complacency,” he said.

To check further spread of the virus and ensure no disruptions in the temple rituals, the district administration has decided to enforce the use of mask and no-spitting protocol much more strictly at the entrance and inside the temple, he said.

“Two teams, led by the Assistant Revenue Officer, will ensure that servitors who have contracted the virus are following the home isolation guidelines effectively. They have a tendency to leave home after 10 days of isolation,” he said.

At the temple office, a COVID cell has been formed under deputy administrator (revenue). “On being intimated about a positive case in the sevayat community, the cell will coordinate with the health administrator in case of any referral and arrange for an ambulance to shift them to Bhubaneswar,” he added.

A meeting was also held to discuss special medical treatment for the sevayats. There will be a dedicated ambulance equipped with a ventilator for them.

As Suar, Mahasuar, Daitapatis and Pujapandas and their family members have been infected, the servitors are also against opening of the temple gates for devotees. “If the shrine is opened for the public, it might aggravate into the Tirupati Temple-like situation,” said a servitor.

Puri Shree Jagannath Development Commissioner Ajay Jena had earlier informed mediapersons that 351 servitors of the temple and 53 employees have contracted the virus.

Earlier in the day, the Odisha government, in its counter-affidavit to the Orissa High Court, had expressed its unwillingness to reopen Srimandir and other religious shrines in the state amid the COVID-19 pandemic.

Highlighting the special case of Jagannath Temple in Puri, the government said that rituals of the sibling deities have been continuing without any pause. However, more infections among servitors and officials of the temple may hit the rituals at the shrine.