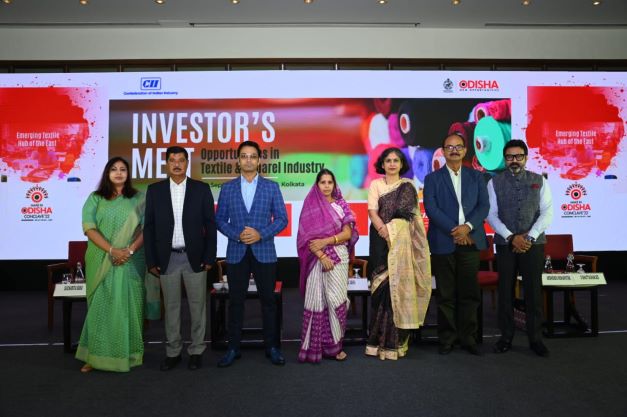 Bhubaneswar: In the run-up to the 3rd Make in Odisha Conclave a roadshow focusing on Textiles sector was organised in Kolkata on Wednesday.

More than 150 delegates attended the roadshow, while representatives of 15 textile and apparel industries had one-to- one meeting with the senior government delegates from the Handlooms, Textiles & Handicrafts, department of Odisha.

Speaking at the roadshow, Rita Sahu, Minister of State (Independent) Handlooms, Textiles & Handicrafts said, “While the metal sector has been an inherent strength of Odisha owing to our natural resource advantage, the Government of Odisha has taken proactive measures to broad base the industrial ecosystem in the state. Textiles is one of the focus sectors where Odisha hopes to achieve exponential growth in the coming years under the leadership and pro-industry approach of Chief Minister Naveen Patnaik.”

Stating that the government is developing a Petroleum, Chemical, and Petrochemical Investment Region (PCPIR) in Paradeep with IOCL as the anchor tenant, Sahu said Odisha is developing as a key investment destination in the chemicals and petrochemicals sector.

“I would urge investors in the technical textile sector to come to Odisha and explore our latest offerings in this geography. The government is developing a technical textile park in association with Indian Oil with a state-of-the-art facility and best-in-class facilitation at Bhadrak, which is close to Kolkata and West Bengal in general,” the minister said.

Shubha Sarma, secretary, Handlooms, Textiles & Handicrafts department, said, “Our government understands that to attract investors we need to build a conducive business ecosystem. While progressive policies are certainly a part of it, we also need to build infrastructure and improve the ease of doing business. And we have done that.”

She further said several decades ago, Odisha had a large number of cooperatives in the spinning, power loom and textile mills space which were supported and promoted by the government. Most of those were closed down, and learning from that experience, the government is looking to create enabling conditions and leave it to professionals to do the actual business. She also spoke about the proposed Mega Textile Park at Gopalpur in a 1000-acre land parcel with all international standard common facilities under MITRA scheme of the Centre.

Prashant Sharma, Chairman, West Bengal State Council & Managing Director, Charnock Hospital gave an overview of the Odisha Government’s initiatives to have a robust and industry friendly ecosystem and extended his invite to guests to the Make in Odisha Conclave.