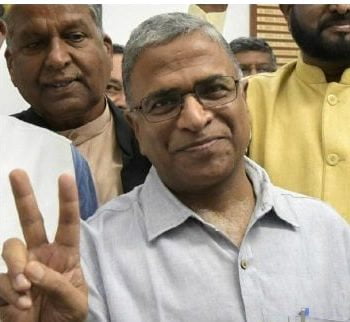 Bhubaneswar: Hours before the election to the post of Deputy Chairman of Rajya Sabha, the Naveen Patnaik-led Biju Janata Dal (BJD) on Monday announced its support to NDA candidate Harivansh Narayan Singh from the Janata Dal (United).

The BJD supremo announced this after Bihar Chief Minister Nitish Kumar talked to him over the phone.

On September 10, Nitish had requested Naveen to extend his party’s support to Harivansh Narayan Singh for the post.

A day later, the BJD had issued a whip to its Rajya Sabha members to remain present in the House on September 14, the first day of the monsoon session of Parliament.

Notably, the BJD had supported Harivansh in the last election for the Rajya Sabha Deputy Chairman in 2018.

The post fell vacant after Harivansh’s term in the upper house expired on April 9 this year. He has has since been re-elected to the Rajya Sabha.

Odisha Board Changes Question Patterns For HSC Examination In 2 Subjects