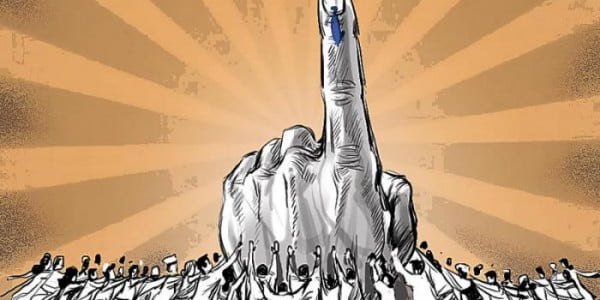 The old normal is dead, the new normal is here. Decaying over decades and bereft of ideas for resurgence, the wretched hangover of a humiliating past had to perish. All its vestiges had to be buried deep, all memories erased so that it did not haunt India again. A happy India cannot prosper on a cesspool of negatives, the trumpeters of the ‘new’ told us five years ago.

The old normal, they said, was defeatist, servile, under-confident and without any sense of pride. It thrived on borrowed ideas of conquerors. Designed to serve the latter’s selfish interests, it systematically destroyed our own ancient knowledge system. It consciously demeaned the nation’s achievements. Neither the education nor the institutions nor the legal reforms they brought in were in alignment with the needs and culture of the country. The history we have been handed down was written from the perspective of the conquerors. It deliberately ignored or underplayed the valour of Indians.

The aberration in the narrative was made worse by the infusion of alien ideas of the Left. The latter invaded all spaces, including culture and arts, and painted them in the colour of their ideology.

The Left intellectual system imposed on the country its own version of the truth, bulldozing every view. All this had to change, with a level playing field for all ideas, they reasoned.

The nation was convinced. Those were the worst possible years. Scandals broke almost on a daily basis. The numbers involved were humongous. The economy presented a gloomy picture. Policy paralysis had left it crippled. The political class had lost touch with people
they represented. The words they uttered reeked of fatigue. They did not resonate with the man on the street. The country was stuck in a time warp and the ineffectual leadership provided no way out. The old had to go. It had lost the justification for survival.

It voted for change in 2014. It was a resounding mandate for the outlier. The country finally had the leader it always missed. His words had instant connect with people at home. On the world stage he made it clear that India had arrived to reclaim its due space.

Politics looked to have regained its moral halo. It was the new the country was waiting for. If it called for sacrifices to be sustained it didn’t mind.
Then somewhere along the line, things shifted. The new establishment changed gears, or let loose what it concealed to the public so far: an agenda. The word establishment was no more about the government and its leader only. It looked that both were either incidental or irrelevant in the bigger scheme of things, which can be loosely termed an ideology.
The ideology was revivalist and revisionist. Its votaries threw aggressive posers at everything associated with the old. It revived dialogues about the true character of the nation. It reverberated on campuses, television studios, public fora and even homes. There was noise. Nothing wrong about it. Because the country had stopped talking about itself – its past, present and future – for decades. It had to do it at some point.
However, it presented itself with a cynical face. It asserted itself with unusual force and in unimaginable dimensions. It identified non-conformists as enemies and unleashed a war to vanquish them. The targets were everyone conceivable: Muslims, Christians, beef-eaters,
rationalists, Leftists, liberals, writers, couples in love and so on.
Soon, we had normalisation of hate. And also normalisation of the lynch mob culture. With full-throated justification for this coming openly from several quarters, including sections of the ruling government, the world was suddenly a different place.
The new normal had truly settled in all its bizarre manifestations. The wonderful possibilities it promised have evaporated. The results are visible. We are a low-trust society now and the trust gap among people is filled with calculated lies and half-truths. There’s too much hatred and anger going around. With both emotions capable of breeding more hatred and anger, we look headed into an unending spiral of violence.
It is difficult to predict whether the society will be able to handle all this for long. People are more divided now than they were earlier. They are more prone to hard, uncompromising positions on issues than earlier. The social capital, the basic essential for the survival of
nations, is depleting fast. This can be dangerous in several ways. Perhaps the old normal, with all its flaws, was better. It still had a hint of morality to it. It didn’t promise much, it didn’t take much from people either. It was under-confident, unassertive yet less soul-destroying.
Disclaimer: The views expressed by the author are his own and do not necessarily represent those of the web portal
2019election
Share FacebookTwitterGoogle+ReddItWhatsAppPinterestEmail

Many Questions Need To Be Answered