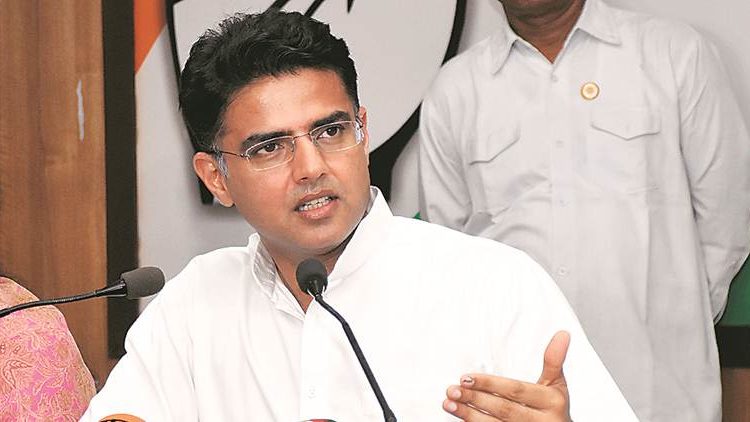 Sachin Pilot may have bitten off more than he can chew.

With dreams of becoming the Chief Minister, he declared war against his own Congress party but was humiliatingly sacked both from the post of Deputy Chief Minister and president of Rajasthan state Congress party. Along with him were sacked his supporting MLAs including three ministers.

In the numbers game, unless Sachin Pilot is able to gather sufficient numbers of MLAs to support him, he will neither be able to topple the government with help of a more than willing BJP nor be able to form a party of his own.

At present, it is an open game.

No wonder Chief Minister Ashok Gehlot is crying hoarse about alleged horse-trading by BJP to topple his government as it did earlier in Karnataka and Madhya Pradesh.

He has already met the Governor to apprise him of the situation following his meeting with his legislators.

The Assembly has 200 seats. A party or coalition needs the support of 101 MLAs for a majority.
In the present day party position, Congress has 107 seats (with six from BSP), RLD which had a pre-poll alliance with Congress has 1, BJP has 72, Rashtriya Loktantrik Party, an ally of BJP has 3,  CPM has 2, BTP has 2 and Independents have 13 seats.

The Congress, along with the RLD and the independents, has a tally of 121. The BJP and its ally RLP have a cumulative tally of 75.

Sachin Pilot claims he has the support of at least 30 MLAs. If he leaves or resigns with this group, the Congress will be down by 30 seats and the total House tally will also come down, making the majority required to form a government 86.

This is where the role of each MLA and particularly of Independents would become very crucial as most of them are with Congress now.

No wonder both Congress and BJP are watching the situation very carefully. Congress is keeping its flock together and is also planning to go in for a reshuffle and expansion of the Cabinet to be able to distribute portfolios to disgruntled elements who may be looking towards jumping the ship.

The Opposition has already said that no reshuffle should take place before a ‘floor test’ because it believes the Gehlot government is in minority.

But then all this depends on a crucial factor, whether Sachin Pilot is able to demonstrate convincingly that he has at least 30 MLAs if not more.

That is easier said than done because the situation continues to be fluid. Both sides are claiming to have the numbers and alleging that the other side is exaggerating its number of supporters who when the time comes, will switch sides. In this scenario, nothing can be said unless a floor test is done.

But then it is up to the Governor to take a decision. Hope is still alive that some kind of settlement may come about in both the groups because Congress has not removed any of the rebels from primary membership of the party.

Meanwhile, inflicting public humiliation upon Sachin Pilot, the Congress high command acted swiftly, sacking him from both the post of Deputy Chief Minister and state party chief along with his supporters once they refused the invitation to the Congress Legislative Party meet chaired by Chief Minister Gehlot for the second time.

The crisis in the Rajasthan government has come as no surprise for anyone because it was almost endemic at the time the incumbent government took over.

It was not a question of why but when because the fissures of the old guard and new guard were wide open when Ashok Gehlot was sworn in as compromise Chief Minister after a lot of drama, witnessed by the whole country.

Sachin Pilot and his loyalists were satisfied only when their leader was given the Deputy Chief Ministership.

There is absolutely no doubt in people’s minds that Pilot is an extremely competent and popular leader whose hard work and contribution in turning Congress’s fate in Rajasthan are unquestionable.

Rahul Gandhi had specifically brought in Pilot to contest the election even though he was not even an MLA along with Gehlot who had been Chief Minister twice and was also a sitting MLA. This combination of old and young representing two factions in Rajasthan managed to topple the Vasundhara Raje-led ruling Bharatiya Janata Party in the state.

Sachin Pilot had played a silent role in rebuilding the party and its position in the state.

While Ashok Gehlot who had been Chief Minister twice and sitting MLA was a veteran in Rajasthan politics, Pilot who had been handpicked by Congress president Rahul Gandhi, represented the youth.

For a young, popular and ambitious Sachin Pilot, a nominal Deputy Chief Ministership and even the party chief position were not satisfying because the power centre continued to be the senior leader and Chief Minister Gehlot. Pilot felt sidelined that he was not given the importance he deemed was due to him.

When his many requests for a change in leadership in Rajasthan was not looked into by the high command even when he pointed out that he was not able to work under Ashok Gehlot, Sachin Pilot took a decision to move away with a number of MLAs including some ministers of the Rajasthan government to force the Congress high command to give in to his demands of making him the Chief Minister, give plum Cabinet posts to his loyalists including Home and Finance, retain the PCC post and remove Avinash Pande, general secretary, and Rajasthan Congress in-charge.

While rumours and allegations were rife that BJP is interested in toppling the Rajasthan government and indulging in horse-trading, Sachin Pilot moved to Delhi with his loyalists and encamped in a hotel.

BJP though smelling blood, made no open overtures to Sachin Pilot because it was obviously, a test of his strength. How many MLAs will move out with Sachin Pilot continues to be the moot question. Any kind of support from the BJP also depends on this.

This disinterest and wait and watch attitude of BJP gave an opportunity to Gehlot to immediately line up all his loyalists together and also go ahead with sacking Sachin Pilot and other leaders of the rebellion. A justifiable punishment and warning to others as to what is going to be their fate if they do not fall in line.

Prior to this, Congress high command had made several attempts to patch up with Sachin Pilot and was ready to accept all his demands except the demand for the CM post but he did not agree. The doors were open for him but when he and his supporters did not respond, the sack order was announced.

Interestingly, Sachin was not given Chief Ministership by his own party and it is also doubtful whether he will get chief ministership with support of BJP or even after joining BJP because BJP has its own senior leaders waiting for the post.

Pilot’s chances of going back to the Congress are also limited after the kind defiance shown by him and humiliation heaped on him.

Sachin Pilot has taken a risk and played perhaps the biggest gamble of his political career. Where it takes him, only the future will tell.