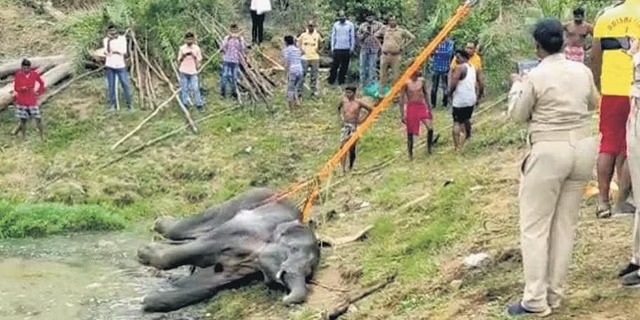 Sambalpur: The 12-year-old tusker, which died hours after being brought out of the water body in Odisha’s Sambalpur district on Tuesday where it was stuck for five days, was reportedly shot at by poachers.

Addressing the media, Divisional Forest Officer (DFO) Vishwanath Neelannavar on Thursday informed that a bullet was recovered from the tusker’s body during the postmortem. “A bullet of 4 cm long and 2.5 cm diameter was recovered from the tusker’s leg bone. The bullet has entered 40 cm deep into the front leg bone. Due to this, the tusker suffered from septicemia and then multi-organ failure led to its death,” he said.

The exact reason behind the male elephant’s death will be known after receiving the postmortem report, he added.

The DFO further informed that three persons have been detained in this connection and a country-made gun and an axe have been seized from them. “The poachers fired on the elephant from atop a tree near the pond,” he said.

Initially, it was suspected the tusker might have sustained the injury in a fight with another elephant.

The elephant was spotted with a wound on its forelimb on May 29. It was tranquilised and treated by doctors from Odisha University of Agriculture and Technology (OUAT), Bhubaneswar on June 2. As the wound did not heal, the elephant developed septicemia and suffered from high fever and sought refuge in a pond at Samplahara in Badasahi range under Sambalpur Forest Division on June 16 to neutralise its body temperature. Two days later, it was again provided treatment after being guided to the embankment of the water body with help of ropes. On Tuesday, forest and fire service personnel brought the pachyderm out of the pond using a hydra crane. However, it succumbed hours after being moved out of the water body.

Elephant Injured In ‘Tussle’ Remains In Pond In Odisha’s Sambalpur;…